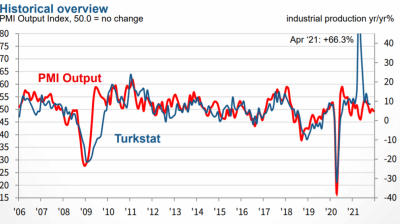 Andrew Harker, economics director at IHS Markit, said: “Cost pressures hampered operations across the Turkish manufacturing sector in December. Record rises in input costs and selling prices deterred customers from committing to new orders, led manufacturers themselves to scale back purchasing and further disrupted supply chains. Alongside the potential issues caused by the emergence of the Omicron variant of the COVID-19 pandemic, the sector begins 2022 in a challenging position.”

Turkish manufacturing firms, however, reported a further increase in staffing levels during December, meaning the headline PMI for their sector remained above the 50.0 no-change mark in the month, ticking up slightly to 52.1 from 52.0 in November.

IHS Markit said: “Continued job creation was one of the factors behind the latest improvement in business conditions. Employment rose for the nineteenth successive month, and at a solid pace that was the fastest since August. Rising staffing levels were often linked to efforts to expand capacity."

It added: “Other indices from the latest survey painted a less positive picture, however, with operations often hampered by steep inflationary pressures.

“Input costs rose at the sharpest pace since the survey began in mid-2005, with the rate of inflation surpassing the previous record from September 2018.

“Firms indicated that lira depreciation was the principal factor pushing up cost burdens. In turn, manufacturers also raised their selling prices at a record pace. Rising prices often deterred customers, resulting in a third successive moderation of total new orders. This was despite new export business continuing to expand amid improving international demand.”

Production was scaled back in December, following a marginal rise in November, IHS Markit also noted, adding: “Again, price pressures were mentioned as a factor behind the slowdown. Firms also moderated their purchasing activity and reduced holdings of both inputs and finished goods due to efforts to contain costs and respond to softer demand conditions. There were again widespread difficulties in sourcing inputs as suppliers’ delivery times lengthened to the second-greatest extent on record.

“According to respondents, delays reflected difficulties obtaining raw materials, in some cases due to fluctuating prices, as well as issues with transportation and particular problems securing goods from abroad.”