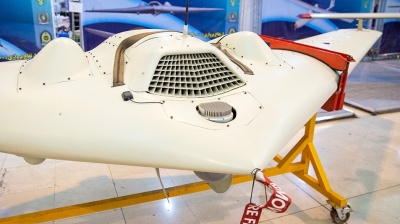 An Iranian Saegheh-2 ("Thunderbolt-2") UAV seen at a defence exhibition in Tehran. Officials have claimed successful combat deployment of the drone in Syria. / Hossein Mersadi, Fars news agency, cc-by-sa 4.0.
By Will Conroy in Prague July 21, 2022

The Pentagon has issued a rare public warning to Iran against a potential transfer to Russia of hundreds of unmanned drones that could be used in the Kremlin’s war against Ukraine – however, experts have questioned whether Iranian unmanned aerial vehicles (UAVs) could make a substantial difference to Russia’s fortunes in the conflict.

Separately, Britain’s spy chief has expressed scepticism over whether Iran's Supreme Leader Ayatollah Ali Khamenei actually wants to revive the 2015 nuclear deal with world powers that would curb the Middle East power’s nuclear development programme in return for the lifting of economic sanctions.

In relation to the likelihood of Iran shipping drones to Russia, when asked about the prospect by reporters at the Pentagon on July 20, US Defense Secretary Lloyd Austin said: “We would advise Iran not to do that. We think it’s a really, really bad idea. And I’ll leave it at that.”

Iran has denied it has any plans to provide the Russian military with drones, but US intelligence has released evidence that Russian delegations have twice visited Kashan Airfield south of Tehran over the past month to view and assess Shahed-191 and Shahed-129 drones, both of which can be equipped with precision-guided missiles, CNN reported.

During Russian leader Vladimir Putin’s visit to Tehran earlier this week, Khamenei expressed some backing for Russia’s decision to invade Ukraine as a way of countering Nato, though he added that he regretted the loss of innocent life.

Speculation as to Khamenei’s latest thinking on the fate of the nuclear deal, or Joint Comprehensive Plan of Action (JCPOA), was one subject of a July 21 speech given by Richard Moore, chief of the UK’s Secret Intelligence Service (SIS), known as MI6, to the Aspen Security Forum in Colorado.

"I'm not convinced we're going to get there [in reviving the JCPOA] ... I don't think the Supreme Leader of Iran wants to cut a deal," Moore told his audience, as reported by Reuters.

But he added: "The Iranians won't want to end the talks either, so they could run on for a bit."

"I think the deal is absolutely on the table. And the European powers and the [US] administration here are very clear on that. And I don't think that the Chinese and Russians, on this issue, would block it. But I don't think the Iranians want it," Moore said.

Iran has hit out at the US for failing to provide guarantees that a successor to US President Joe Biden would not unilaterally abandon the multilateral deal in the way that Biden’s predecessor Donald Trump did in May 2018, prior to unleashing on Tehran what Iran has described as an “economic war”.

Since the war in Ukraine began in late February, Moscow and Tehran have moved distinctly closer in economic and geopolitical relations, but how far their relationship could develop is still the subject of much discussion, producing a wide range of views. Whether or not a transfer of drones from Iran to Russia eventuates will be a key test of how close the world’s two most sanctioned nations have and may become.

However, looking at Putin’s potential drone deal with Iran, Federico Borsari, an analyst at the European Council on Foreign Relations (ECFR), in an analysis questioned whether the military hardware would be of much use to Russian forces on the battlefield.

He concluded: “In all, while Iranian drones would be better than nothing, there is little chance that they would markedly shift the battle in Russia’s favour – just as Ukraine’s Turkish-made drones have not been decisive by themselves. Iranian UAVs will not solve Russia’s main problem: how to find enough manpower to rotate and regenerate its forces, sustain new operations and hold conquered territory. As always in war, it would be misleading to view events through the lens of a single type of weapon.”

Borsari observed that Russian drones such as the Eleron-3 and the Orlan-10 – both tactical UAVs used for intelligence, surveillance, target acquisition and reconnaissance – have been decimated by Ukraine’s electronic warfare systems and short-range man-portable air defences. “Meanwhile,” the analyst said, “Russia has only a few high-end platforms such as its Inokhodets combat drone and has used them sparingly, producing modest results. The country’s indigenous loitering munitions – such as the Zala KYB, which is capable of carrying a 3kg explosive payload and striking targets within a 40-km range – seem to have a high failure rate.”

Russia, said Borsari, can quickly replace models such as the Orlan-10 and the Eleron-3, including with crowdsourced off-the-shelf UAVs. But it cannot do so, he added, with advanced strike platforms that have high-tech parts and take longer to manufacture. That’s a problem that may soon grow as Western sanctions increasingly restrict Russia’s access to foreign-made components, Borsari also pointed out, saying: “Although one should not underestimate the resilience of the Russian defence industry, it is likely to lose much of its capacity in the medium to long term. For example, the Italian customs authorities recently seized several containers holding US-made components of UAVs that were worth tens of millions of dollars and were allegedly on their way to Russia via Qatar.”

Many defence analysts see Russia as struggling to deal with the increasing number of precise, long-range artillery systems Ukraine is receiving from its Western partners, such as HIMARS and M270s. Kyiv has used these systems to destroy dozens of Russian ammunition dumps and command centres.

“The Russian military,” said Borsari, “is now in desperate need of expendable combat UAVs, akin to Ukrainian TB2s, which can travel deep enough into enemy territory to disable these Ukrainian systems. Iran is well-placed to provide relatively cheap and quickly deployable UAVs of this kind.”

Belarus Corruption Watch: How one of Lukashenko’s 'wallets' evades sanctions
11 hours ago
Poland basks in the glory of being Kyiv’s chief ally in Europe
3 days ago
Russia forges ahead with gas ambitions in Uzbekistan, Kazakhstan
4 days ago
Mongolian government accused of rushing through veiled law that dismantles freedom of speech
5 days ago
Russia is preparing for spring mass mobilisation
5 days ago