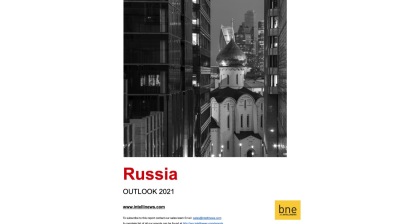 Russia weathered the corona storm better than most, but that was a function of its underdeveloped nature of its economy and huge financial reserves rather than doing something clever / wiki
By Ben Aris in Berlin January 28, 2021

The main political event of 2021 is the Duma elections in September. The popularity of the ruling United Russia Party has been falling but it is still expected to win a majority, albeit perhaps in partnership with some new smaller parties.

The main policy goals are to restart the spending on the 12 national projects that are supposed to “transform” the economy and specifically bring back the prosperity Russians enjoyed until the stagnation started in 2011 in the hope of countering Russia's slowly rising social discontent.

After the slump in 2020 Russia’s economy will start growing again in 2021 and expand by between 2.5% and 4%, according to the various forecasts. The rate of growth is uncertain due to the number of unpredictable factors. On the down side real income growth is likely to remain negative, holding back consumption. The government is also planning to cut spending. On the plus side oil and commodity prices are likely to grow and bring in extra funds and inflows of foreign capital into Russia's local bond market, which has been significant and supportive of the ruble. The biggest unknown is whether the US will impose new sanctions and if it does, how harsh these will be. However, the main macro indicators have already stabilised and are likely to remain close to current levels for most of 2021.

At its last meeting of the year the CBR kept the monetary policy rates on hold at 4.25% due to the reappearance of inflationary pressures. Food prices had spiked to the point where the government started negotiations with producers to artificially cap price increases. The CBR revised upwards CPI from 3.8-4.2% year on year to 4.6-4.9% y/y by YE20 due to the impact of short-term one-off factors, but its statements were less dovish going forward and it is now clear there will be no more cuts in at least the first quarter of 2021 and maybe not for the entire 2021. The easing cycle has definitely ended.

The federal budget deficit will amount to 3.9% of GDP in 2020, with the non-oil deficit at 8.8% of GDP. Budget execution appeared to be better than previously expected (4.4% of GDP in September and 5% of GDP in June).

The budget deficit will be reduced to 2.6% in 2021 partly thanks to the government’s ongoing commitment to a policy of austerity rather than one of boosting growth. This is wrapped up with the Kremlin’s belief that it is in an economic war with the West and so won’t spend from its large National Welfare Fund (NWF) to stimulate growth, instead preferring to sit on this reserve, which is seen more as a strategic defensive weapon.

"Extremely conservative" spending Federal budget expenditures in 2021, according to the analysts, will be 9% lower than the current year level, or by RUB2.2 trillion, which is about 2% of the potential GDP in 2021.

New spending is coming from reforms to the government that are designed to stop the stealing, more efficiently tax both the population and companies and find new revenue streams. The government has also committed to increasing borrowing modestly from 14% of GDP in 2020 to just over 20% in 2021. Austerity and budget deficits are expected to stay in place until 2023, slowing the pace of the recovery.

Commodity prices were already rising again in November and are likely to continue to strength on the back of a global recovery, and boosted by the weakening dollar.

Industry was struggling in 2020 and after a brief recovery following the end of the lockdowns it stalled again in the autumn. Industry should pick up again in 2021, particularly in the second half of the year as the vaccines do their magic, and the numbers will be strong thanks to the low base effect. But fundamentally there will be a recovery too from the release of a year's worth of pent up demand.

Corporate profits remain sensitive to changes in things like personal income. While the situation with companies remains stable, their outlook is still unpredictable. Profits remain below 2019 levels but are expected to continue closing the gap in 2021.

BCS GM set its end-of-year 12MF RTS index target at 1670 – borderline between a Buy and a Hold – that suggests the market has a 20% upside in the last month of trading.

The Russian stock market was growing strongly in the first two months of 2020 before the multiple shocks knocked it off the rails. However, it started to surge again in November after the coronavirus (COVID-19) vaccine trial results were announced and following the conclusion of the US presidential elections.

The prospects for a relief rally and a return to growing valuations are good, as traditionally the securities markets have done well in the year following a big crisis. On top of that, structural changes, like the anticipated weakening of the dollar over the next few years, will support emerging markets (EM) stocks in general and domestically the last of the big state-owned enterprises (SOEs) are expected to fulfil the MinFin order to pay out 50% of income as dividends that will also be supportive. Traders believe the market could rise over 30% in 2021 on a general re-rating and the RTS could end 2021 at 1,850, up from 1,400 at the start. 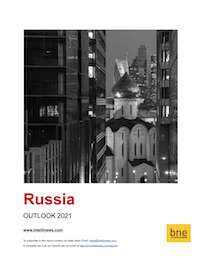 bneGREEN: Is coal killing us all?
Kyrgyzstan's Peak Putin becomes a case of 'pique Putin' as protesters plant Ukrainian flag atop mountain
Nine out of 10 Russians oppose concessions in exchange for end of sanctions