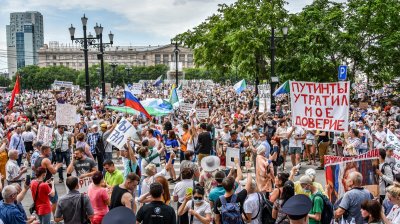 Slightly less than a third of Russians say they are willing to vote for the ruling United Russia Party, according to the Levada Center. / wiki
By Ben Aris in Belrin September 9, 2020

With important regional elections due to start on September 13, the Kremlin is set for an uphill battle to maintain control of the outcome. Only 31% of Russians say they are willing to vote for the ruling United Russia Party, according to independent pollster the Levada Center.

If elections to the State Duma took place this coming Sunday, 31% of Russians would vote for United Russia. The study showed that 11% of respondents are now ready to vote for the ultra-nationalist Liberal Democratic Party of Russia (LDPR) headed by Vladimir Zhirinovsky, and 7% for the Communist Party of the Russian Federation (KPRF) headed by Gennady Zhuganov.

Other parties – Fair Russia, Motherland, Communists of Russia, Yabloko, Party of People's Freedom (PARNAS), Green Party, New People, Russian Party of Pensioners for Justice – will all get no more than 3% of votes each, says Levada.

Another 6% of the respondents said that they would spoil their ballot papers, 22% of Russians will not vote, and 11% were undecided about their choice.

Three days of voting will run from September 11 to 13. There will be several new forms of early voting that were introduced during the voting on amendments to the Constitution between June 25 and July 1.

Opponents of the extended voting point out that this format will significantly complicate control over the transparency and cleanness of elections, and will also require a significant increase in funding for their preparation and conduct.

The Kremlin has a lot to lose. It has been struggling to keep control of regional politics and has been wrong-footed by surprise victories in some regions.

In the most high-profile case, widespread protests in the eastern city of Khabarovsk have been going on for almost two months since the authorities arrested and removed the regional governor Sergey Furgal, who was elected as governor in a surprise victory.

Furgal is from the LDPR headed by the colourful Zhirinovsky, who is seen as co-operating with the Kremlin. Furgal was charged with murder but was extremely popular with the locals, as he turned out to also be an effective leader.

The protests in Khabarovsk  have become a major political headache for the Kremlin. Half of Russians support the anti-Kremlin protests in the Far Eastern region, according to an independent Levada Center poll published on July 28.

And power is shifting to the regions. As bne IntelliNews has reported, the regional governors have been enjoying unprecedented popularity recently as Russia’s regions continue to develop and as investment by the centre has seen the quality of life in the regions improve, despite the economic stagnation. This summer, the governors briefly overtook Russian President Vladimir Putin’s popularity rating before falling back slightly in July to around 65%. The government and Duma deputies remain far more unpopular.

First official results from Bosnian elections put nationalists ahead after exit polls predicted losses
10 hours ago
Georgian MPs want to rid the country of oligarchs, but not all of them
10 hours ago
Hungary agrees on deferred payments with Gazprom for winter gas deliveries
11 hours ago
US sanctions Russia’s CBR head Nabiullina and other officials
11 hours ago
Russia prepares for new attacks against Ukraine from Belarusian territory
11 hours ago