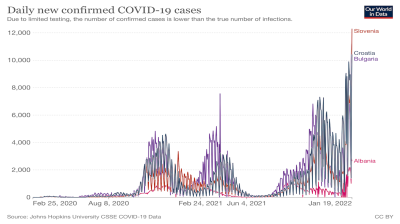 As the Omicron variant of the coronavirus (COVID-19) spreads across Southeast Europe, most of the countries in the region are reporting new record numbers of infections.

Bulgaria, the least vaccinated EU member stated, recorded 11,181 new cases as of January 19. This is the highest ever number, beating the record from the previous day when nearly 10,000 new cases were registered.

So far, the authorities do not intend to impose a full lockdown and are attempting to persuade people to get vaccinated and respect the measures.

However, some schools are already struggling due to the high number of ill teachers and are forced to switch to online classes. Many classes are also quarantined due to infected students. According to Education Minister Nikolai Denkov, the number of infected students jumped ten times compared to December.

More than 40% of all cases are people infected with the Omicron variant.

In Croatia, the number of new cases also hit a new record, reaching 10,427 on January 19. The number is even higher if positive antigen tests are taken into account at 16,071. The previous record, based on PCR tests, was a week earlier when 9,894 new cases were registered.

The total number of active cases in Croatia stood at 56,208 on January 19.

Albania reported a new record on January 18 of 2,832 cases in 24 hours. Almost half the cases are in Tirana. The Ministry of Health is urging people to get vaccinated, follow the rules and wear a mask.

On January ,18 North Macedonia recorded a record high number of new COVID-19 infections, 2,269, while the number of active cases increased to over 17,000 as the Omicron variant is spreading rapidly.

In Kosovo the number of active cases increased to 2,500 after the daily number of infections rose by 720 on January 18. The situation in Kosovo was under control from October until end of December with only few cases recorded on a daily basis.

In Slovenia the number of new coronavirus cases spiked on January 18, reaching a new record high with as many as 12,286 new daily infections recorded. 63.2% of PCR tests were positive.

While the rest of the region is struggling with the rapid spread of the virus, in Montenegro, where the number of new cases also remains high at around 2,000 per day, the government decided to ease some restrictions.

On January 19, the authorities decided to allow playrooms for children to operate all the staff have green certificates. All restaurants are also allowed to work until midnight. According to the director of the Institute for Public Health, Igor Galic, the restrictions are being eased starting from January 20 for two weeks as the number of new cases is falling, although remaining high.