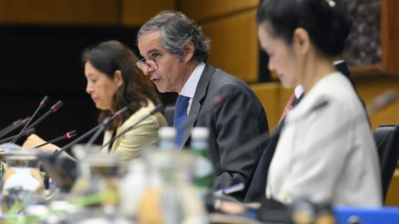 UN nuclear inspectorate chief Rafael Grossi is now talking about a three or four-week countdown to the death of the nuclear deal. / Photo: D. Calma/IAEA.
By Will Conroy in Prague June 9, 2022

Analysts and diplomats were on June 9 wondering whether Iran had dealt a death blow to the nuclear deal talks by removing 27 UN atomic inspectorate cameras from its main nuclear development programme facilities.

Officials in Tehran described the move as a response to Europe and Washington’s move to censure Iran for failing to co-operate with the inspectorate, the International Atomic Energy Agency (IAEA). Iran pointedly also said that it had installed additional centrifuges to enrich uranium. There are fears Iran may be only weeks away from "breakout", in other words, producing enough highly enriched uranium to make a crude nuclear bomb. Weaponising the material for deployment in a nuclear missile would likely take some additional years, according to most experts.

The IAEA has in the past week stepped up its criticism of Iran for not co-operating with its monitoring work. It has also been in further consultations with Israel, an implacable opponent of the Iranian nuclear programme that has threatened military strikes to prevent Iran from becoming a nuclear state. Those consultations may have irritated Tehran, as it accuses Israel of sowing disinformation about its nuclear efforts. It claims to have no ambition to make a nuclear bomb, but experts have responded that in that case its push to stockpile highly enriched uranium makes little sense, unless it is simply to gain leverage over the West in its bid to secure the removal of sanctions.

A large-scale lifting of sanctions would be one reward for Iran should it agree to curbs on its nuclear programme in return for the reinstatement of the 2015 nuclear deal, or JCPOA –abandoned by former US president Donald Trump in May 2018 – but a few stubborn obstacles to such a JCPOA revival remain. For instance, US President Joe Biden has not agreed to Iran’s demand that the Islamic Revolutionary Guard Corps (IRGC) be taken off Washington’s list of designated foreign terrorist organisations (FTOs).

The three European signatories to the JCPOA – known as the E3: France, Germany and the UK – said in a June 9 statement: “Iran’s nuclear advances are not only dangerous and illegal, they risk unravelling the deal that we have so carefully crafted together to restore the nuclear deal. The more Iran is advancing and accumulating knowledge with irreversible consequences, the more difficult it is to come back to the deal.”

Chinese Foreign Ministry spokesperson Zhao Lijian on June 9 called the US "the culprit in the Iranian nuclear crisis" and urged America to "respond positively to the legitimate concerns of the Iranian side".

The IAEA chief, Rafael Grossi, said on June 9 that the time to conclude a path to reviving the JCPOA was running out. “What we have been informed is that 27 cameras … are being removed in Iran,” he told journalists, AFP reported. “So this of course poses a serious challenge to our ability to continue working there [at the Iranian nuclear sites].”

Grossi said there was a three to four-week window for a nuclear deal relaunch agreement to be concluded.

A further 40 monitoring cameras remain at Iran’s nuclear sites. They have not yet been switched off.

The IAEA has not had access to footage from its cameras in Iran since February 2021, but there is a deal with Tehran that they should keep filming, with the footage, kept on memory cards, to be handed over to IAEA inspectors upon the sealing of a further agreement.

The US State Department said the Iranian move to withdraw surveillance cameras was “extremely regrettable”.

Separately, a Greek court on June 9 quashed an earlier court ruling permitting Greece to seize Iranian oil cargoes after it impounded the Iranian-flagged Lana tanker in April. Following the initial ruling, the US, which under sanctions imposed on Tehran attempts to keep Iranian oil off global markets, in May confiscated some of the oil cargoes.

Apparently in response to the fate of the Lana and its oil cargoes, Iran last month seized two Greek tankers in the Persian Gulf.

Asked if the quashing of the initial judicial decision could open the way for the release by Iran of the two Greek tankers and their crews, Greek government spokesperson Giannis Oikonomou said Greek justice was independent, Reuters reported.