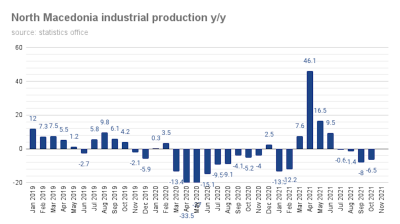 North Macedonia's industrial output declined for the fourth consecutive month in October by an annual 6.5%, narrowing from the 8% decrease in the previous month, statistics office data showed on November 30.

Industrial production fell from July to October after four months of growth. The biggest annual increase in industrial output this year was in April, when it jumped 46.1%, due to the low base effect.

In October, industrial production increased in the mining and quarrying as well as in utilities, but fell significantly in the key manufacturing sector.

The manufacturing industry contracted by 10.4% y/y in the tenth month of the year, narrowing from a 15.1% drop in the previous month.

The utilities sector grew by 18.6% y/y in October, speeding up from a 11.5% increase a month earlier.

In the first ten months of the year, industrial production rose by 1.8%.