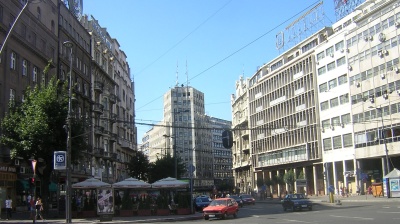 Hundreds of security cameras were installed in Belgrade, to the surprise of the local population.
By Eldar Dizdarevic in Sarajevo September 22, 2021

The SHARE Foundation in Belgrade has warned that if legal provisions on mass biometric surveillance in public spaces are adopted, Serbia will become the first country in Europe with non-selective surveillance of all citizens.

Serbia has launched a public debate on the Draft Law on Internal Affairs, which the NGO says will allow mass biometric surveillance using advanced technologies for facial detection and recognition.

There are already concerns in Serbia about the hundreds of smart cameras installed on the streets of the capital Belgrade since 2019 under a partnership between the government and Chinese tech giant Huawei. The cameras, which have advanced facial and license plate recognition software, were installed under a safe city project ostensibly with the aim of fighting crime, but critics say they could also be used, for example, to identify protesters and clamp down on opposition activity.

Until now, officials have said that the facial recognition software is not being used as critics like SHARE have pointed out that there is not yet any legal basis for biometric surveillance of the population. However, if passed, the new legislation would make it possible to start using the cameras legally.

The technologies that would be made available to the police are “extremely intrusive towards people's privacy, with potentially drastic consequences for their rights and freedoms and will have an unforeseeable impact on a democratic society,” SHARE said in a statement.

SHARE recalled that the United Nations and the European Union had already said they were against applying mass biometric surveillance by police and state other security services.

After the public consultation was launched, the foundation submitted comments on the provisions regulating mass biometric surveillance in public spaces and asked the authorities to declare an immediate moratorium on using such technologies and systems in Serbia.

The European network European Digital Rights (EDRi) also submitted an official letter to Serbia’s government saying that the provisions on establishing a system for mass collection, processing and automatic analysis of biometric and other sensitive personal data are incompatible with the guarantees of the European Convention on Human Rights, which Serbia ratified 2004.

“The proposal of the new law on internal affairs of the government of Serbia is an attempt to legalise the practices of mass biometric surveillance, which would enable intrusion into the private lives of citizens and visitors of Serbia on an unprecedented scale,” said Dijego Naranho, head of policy at EDRi, in the letter.

The disputed provisions envisage the establishment of a system of mass biometric surveillance throughout Serbia, without determining the necessity of the proposed measure for all citizens of Serbia to be constantly treated as potential criminals by disproportionately invading the privacy of their lives, SHARE argued. Of particular concern is the lack of a detailed assessment of the impact that the application of total biometric surveillance can have on vulnerable social groups, but also on journalists, civic activists and other actors in a democratic society, according to the NGO.

Dsight, a Moscow-based business intelligence company with a focus on investment, has just released the English version of its Russian venture report covering the first half of 2021.