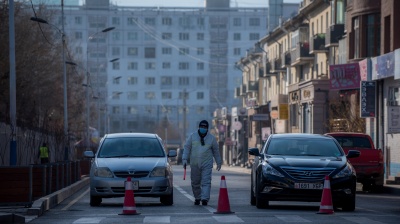 Mongolia is on high alert for a wider virus spread.
By Anand Tumurtogoo in Ulaanbaatar November 16, 2020

Mongolia has lost its status as a country free of community transmissions of coronavirus (COVID-19) and on November 13 entered a five-day lockdown, extended on November 16 until December 1.

A truck driver back from Russia, who underwent a 21-day mandatory isolation, nevertheless appears to have infected his wife in Ulaanbaatar. The State Emergency Commission is facing questions as to why his infection, discovered on November 9, was not detected during the quarantine period that ended on November 6.

A second community transmission involves a 74-year-old woman, along with her daughter-in-law and granddaughter in the northern part of Mongolia, in Selenge province. Health Minister Togtmol Munkhsaikhan said there was no known connection with the truck driver or his wife.

As of November 15, nine people in Mongolia were recorded as infected following contact with the driver.

A whistleblower, who was quarantined in the same quarantine facility, Enkhsaran, as the truck driver claimed to local press that there was a cluster of infections in the quarantine facility and that he caught the virus almost on the last day of his 21 days of quarantine. Munkhbat and many others see the situation as down to government negligence and say officials have not been entirely straight with people on the pattern of the virus spread.

On November 15, the health minister stated that there have been 40 cases connected to the set quarantine facility, stating there were three clusters of COVID in Mongolia—linked to the truck driver, the Selenge province woman and the quarantine facility.

Tedros Adhanom Ghebreyesus, director-general of the World Health Organisation, praised Mongolia on Twitter last week for “showing us that by following proven public health advice we can stop this virus from spreading.”

The country has not recorded a single coronavirus death.

In their scramble to contain the virus after the first local transmissions were confirmed, authorities sent out jumbled orders, such as on what transport means to use, but were forced to retreat on some instructions after a public outcry grew intense. People complained for instance that there was no communication of who should take care of the children of essential workers. They said it was as if the government had no contingency plan for a virus outbreak.

Under the lockdown, border points dealing with trade with Russia will provide limited access or will be shut down entirely from November 16 to January 18, while oil imports will only enter Mongolia once every two days from Russia. In terms of China, Mongolia will keep its trade routes open. An insider from China's coal trade expressed worries that Mongolia will close its borders soon.

Local mining companies are worried that if Mongolia isn’t successful in containing the virus, China might close its borders or limit trade. This would undo the success it had in terms of exporting coal to China since August, helped by China’s squeezing of coal imports from Australia, with which it is involved in diplomatic spats. In September, Mongolia overtook Australia as the number country exporting coal to China.

If China closes its borders with Mongolia it will heavily impact the state budget. Mongolia’s parliament scrambled to ratify the 2021 state budget on November 13.

One out of three mining operations might be in jeopardy if the virus situation worsens. Most of the coal mines that export to China are located in southern Mongolia. The Rio Tinto-financed Oyu Tolgoi copper and gold mine and other gold and precious metal exploration mining sites are also located to the south; however, the Erdenet Mining corporation, which produces 22.23mn tonnes of ore per year, 126,700 tonnes of copper and 1954 tonnes of molybdenum, could face closures as it is located next to the province where the second virus cluster was recorded.

In 2019, trade with China accounted for 90% of Mongolia’s export revenue, but Russia accounted for just 0.9%. Mongolia had a trade surplus of $3bn in 2019, but a trade balance deficit of $915.5mn with Russia as part of that, according to Mongolia’s national statistics office.

Rio Tinto and Mongolia agree to replace $7bn plan for Oyu Tolgoi underground expansion
COMMENT: Why critics are asking if Inner Mongolia is the next Tibet or Xinjiang
Mongolia’s pitiless dzud

Sees Turkey going into another boom-and-bust cycle though, with the right policies, believes country could be best growth story in European time zone for the next 10 years.