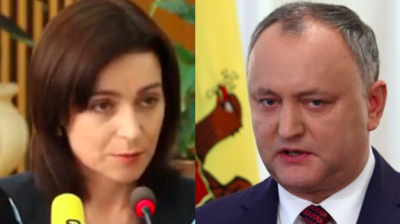 Moldovan voters will choose their president on November 15 in perhaps the most important presidential election since the ousting of the post-communist regime in 2009.

The second round of the election will pit pro-Russian President Igor Dodon against pro-EU politician Maia Sandu, who currently looks set to defeat the incumbent.

Dodon managed to defeat his rival Vlad Plahotniuc, the country’s former top oligarch now self-exiled in Turkey, by an alliance with pro-EU parties last summer that was broken a few months later. Yet he now risks losing everything through an election defeat just as he has managed to take control of the entire system in the country through his appointments of Prime Minister Ion Chicu and head prosecutor Alexandr Stoianoglo.

He faces Sandu, whom he defeated by a narrow margin in the last presidential election in 2016. Sandu is backed by a sundry collection of parties — primarily by her own Party of Action and Solidarity (PAS) and fellow pro-EU party PPDA, but she has also been endorsed by more controversial politicians such as Partidul Nostru leader Renato Usatii. Virtually all of Moldova’s main politicians, except for Ilan Shor, expressed their support for Sandu over the past week, a sign of their expectations related to the November 15 ballot. The Democratic Party led by former prime minster Pavel Filip even pulled out from the ruling coalition with Dodon’s Socialists, preparing for negotiations to enter a new ruling coalition.

Speaking before the election Dodon still claimed that the Socialist cabinet, left with minority support in parliament since this week after the Democratic Party pulled out of the ruling coalition, will enjoy “robust support” after the elections.

Both presidential candidates promised to take steps toward early elections, each of them expecting to consolidate support among lawmakers. Although the political structure of the parliament (no majority coalition) should in principle support such a scenario, their attempts will likely result in a political crisis with an uncertain outcome.

In their last moves before the final round of elections, Dodon paid pensions in advance and made sure that the residents of the pro-Russian separatist region Transnistria are allowed to travel to Moldova proper to vote, while Sandu approached the Russian-speaking electorate with a speech aimed at countering Dodon’s propaganda.