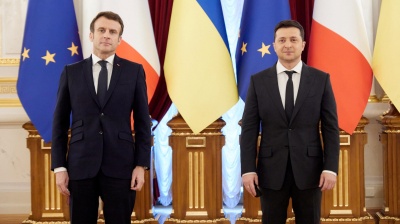 Minsk Agreements are “the only path to peace” French President Emmanuel Macron said during a visit to Kyiv in an effort to de-escalate the Ukrainian crisis / wiki
By Dominic Culverwell in Berlin February 9, 2022

French President Emmanuel Macron met with his Ukrainian counterpart Volodymyr Zelenskiy in Kyiv to discuss de-escalating the rising tensions between Ukraine and Russia on February 8.

Macron’s Ukraine visit comes after meeting with President Vladimir Putin in Moscow on February 7 as part of his own diplomatic effort. Analysts speculate that the Kremlin has become averse to dealing with multilateral organisations and prefers bilateral negotiations where it can thrash out a deal quickly and simply.

The French leader called for “calmness” and “concrete practical solutions”, praising President Zelenskiy and Ukrainian citizens for their “stiff upper lip” in the face of military aggression from Russia.

While Macron was in Kyiv the French government announced it would allocate €1.2bn worth of macro-financial assistance to support economic development, Zelenskiy announced at a briefing after the president’s meeting.

"The economic support is very important, we really value such solidarity move with other countries, and it's a powerful move on the behalf of Emmanuel, on the behalf of France - the allocation of €1.2bn of macrofinancial assistance for Ukraine. This will actually help us stabilize our economy. We're already fine now, but it's a powerful move for Ukraine's economic fortitude", Zelenskiy said.

Earlier, it was reported that the EU will assign the same sum in macrofinancial aid for Ukraine. According to Ursula von der Leiden, this support will help Ukraine "cover its financial needs amidst the possible armed conflict and support Ukraine's efforts in boosting its fortitude".

In contrast to the doomsday rhetoric from the USA and the UK, Macron refrained from overtly combative language. Instead, he is positioning himself as a mediator between Moscow and Kyiv “to reinstate order, security and stability”.

“First of all, we have to methodically implement the Minsk Agreements in the Normandy Format. Secondly, we have to continue the dialogue that will help us build shared guarantees of security and stability on our continent,” Macron stated during a press conference with Zelenskiy after the meeting.

He later claimed to have the “very clear commitment of President Putin and Zelenskiy to implement the Minsk Agreements (...) Things have to move forward based on a common understanding of the text signed in 2015.”

The Normandy Format, a contact group involving France, Germany, Ukraine and Russia formed in 2014 after the breakout of the Donbas War, held its first meeting in Paris on January 27 after a two-year hiatus and is due to hold a second meeting in the coming weeks in Berlin. Zelenskiy stated his support for the re-igniting of the talks and their potential to encourage “co-operation” and “openness” between all parties.

The Minsk Agreements haven’t been fully implemented by either Kyiv or Moscow since they were signed in 2014 and 2015. However, Macron still emphasised they are “the only path forward that will allow us to build peace”.

There is one particular point of contention for Ukrainians. The Minsk II agreement includes a requirement that Ukraine must engage in dialogue with the Donetsk and Luhansk People’s Republic, the occupied territories of East Ukraine, and acknowledge their “special status”. By agreeing to do so, the DPR and LPR, already under de-facto Russian control, will have the de facto power to veto any bid by Ukraine to join Nato.

Although this puts Zelenskiy and Ukraine in a tough position, Ukraine's western allies  have universally called for the Minsk II protocals to be implemented.

"The [Minsk] agreements speak of special status for the Donbas and I believe that with the appropriate sequencing, Ukrainians would be prepared to move forward," US Secretary of State Blinken said, as cited by the Russian newswire Sputnik, adding that the Minsk II agreement is the “only way to bring peace to Ukraine’s east.”

This is a possible alternative solution to the blanket ban on Ukraine’s application to join Nato that the Kremlin is demanding, say analysts.

Macron made it clear that the purpose of the talks with Putin and Zelenskiy is not to focus on the Nato discussion, but rather on how to de-escalate the crisis.

Macron’s meeting with Putin has proven to be controversial with some critics accusing Macron of “freelancing”  for his own benefit and others claiming that he was proposing the “Finlandisation”  of Ukraine – pushing for Ukraine to adopt a neutrality stance that includes a commitment to not apply for Nato membership.

Macron also told journalists on the plane with him during the flight from Moscow to Kyiv that Putin had assured the French president that Russia would not escalate militarily and that the Russian troops currently in Belarus would leave that country once their on-going exercises were over later this month.

Those statements were contradicted by Russian presidential spokesman Dmitry Peskov, who downplayed Macron’s comments saying “it is not so clear,” what was said between Macron and Putin.

Putin has assured that Russia will continue the dialogue, Macron stressed, claiming that Putin confirmed he will not “trigger an escalation” or build a “permanent base in Belarus”. However, Macron also emphasised that a “few hours of discussion” will not solve the conflict and will only start to see progress in the coming weeks and months.

As part of the European diplomatic drive to resolve the crisis, the German, Czech, Slovak and Austrian foreign ministers also visited Kyiv this week. Germany’s Baerbock made her second visit to Kyiv in a month and was on the ground in Kyiv to meet top Ukrainian leaders, although her meeting with Ukrainian President Volodymyr Zelenskiy was cancelled at the last minute because of “scheduling problems” in what some see as a snub after Berlin refused to send Ukraine more defensive weapons last week.

Analysts say that while this European diplomatic drive is on, Russia is unlikely to launch a military offensive, as the Kremlin is still holding out hope for an agreement on its key demand: Ukraine will never be offered Nato membership.

“The high-profile diplomatic effort will continue through next week, and many observers are looking at February 20, when both the [Beijing] Olympics and military manoeuvres in Belarus will end. Because the manoeuvres themselves are under close observation, there is little expectation that a further invasion of Ukraine would start from there at that time,” James Hydzik of Concorde Capital in Kyiv said in a note.