What do Ukrainian tank exports to Kenya, flu vaccine imports from Oregon and oil rig imports from Wales all have in common? They are all deals carried out by the same shell companies that are linked to a small set of Latvian directors. A scandal is unfolding in Ukraine that could be dubbed Vanagels-gate as more details of dodgy and outright illegal deals using a string of shell companies emerges, which can be traced directly back to the upper echelons of the Ukrainian government.

When the merchant vessel Faina was intercepted on its way from Odesa to the Kenyan port of Mombasa by Somali pirates in September 2008, international concern focused not only on the plight of the crew of 21, but on the cargo of 33 T-72 tanks, heavy weaponry and ammunition that the pirates found on board. The ship was bound for Mombassa, Kenya, but the pirates (and later US intelligence officers) said the actual destination was Juba in Southern Sudan - a country that is currently under a blanket UN arms embargo.

Who did the ship belong to and who was pocketing the profits from the embargo busting illegal arms shipments? Faina is owned by an anonymous Panamanian company Waterlux AG, which lists two more anonymous Panamanian companies: Systemo AG and Cascado AG, as executives. The latter two companies in turn both list Latvians Erik Vanagels and Stan Gorin as president and treasurer, but at the time no-one could make much of this information, dismissing the Latvians as mere nominees.

According to an investigation conducted by bne, Vanagels and Gorin - together with Latvian colleagues such as Juri Vitman, Elmar Zallapa and Inta Bilder - preside over a sprawling network of companies with Baltic bank accounts that have extensive dealings with the Ukrainian state, covering everything from arms exports to machinery imports.

Companies headed by Vanagels and Gorin won a government order in a March tender on behalf of state-owned oil company Chernomoreneftegas, Ukraine's Black Sea oil producer, for the delivery of $400m worth of oil drilling equipment.

The tender was won by Cardiff-registered Highway Investment Processing LLP, which lists Stan Gorin as a director according to the UK's Companies House. The only other company to "compete" in the tender was Falcona Systems Limited, registered in New Zealand and listing another Latvian, Inta Bilder, as director. It will come as no surprise that this company was founded by Interhold, which lists the ubiquitous Erik Vanagels as a director.

In other words, there was no competition for the oil equipment order, which was parcelled out to the Latvian cabal in a sham of an tender. According to Ukrainian weekly Zerkalo Nedeli, the producer's price for the oil equipment was only $248.5m, so someone made a handsome $150m profit from the deal for doing nothing more than some paperwork.

The Latvian cabal is politically non-partisan, having done similar deals under the previous Ukrainian administration. On May 28, a US court in Oregon found that US-registered company Olden Group LLC had illegally overcharged the Ukrainian government $19m for flu vaccines during the swine flu scare of autumn 2009, according to a government press release.

President Viktor Yanukovych ordered an investigation into the medicine purchases after taking office in 2010. The investigation by US detective bureau Trout Cacheris found $40m of state purchase of vaccines and medical equipment in the two previous years had all been put through the same network of offshore intermediaries with bank accounts in Lithuania and Latvia. Vanagels, Gorin and another member of the network, Juri Vitman, were linked to all these companies, which the investigation found routinely inflated prices by 50%.

Vanagels' role is only coming to light now as the local press starts digging out more and more information on the Latvian cabal and its ties to the present and past administrations. The network's activity can be traced back over a decade to the establishment in the mid-1990s of Ukraine's state weapons export monopoly Ukrspetseksport. Evidence suggests Venagals, Gorin and Zallapa have scores of companies dating from that time registered around the world - Ireland, the UK, New Zealand and Panama - and those are only the ones that have come to light so far.

The Ukrspetseksport connection continues right up to the present day as the Faina scandal reveals. Ukrainian court records reveal that contracts for goods shipments carried by Faina's sister ship, MS Brilliant, which plies its way weekly from Odesa to Syria on behalf of an Ukrspetseksport partner company, were in the name of Panamanian offshore Ridemax Systems Inc, a sister company of Waterlux AG.

According to British director records, there are in fact two Erik Vanagels, both registered at the same Riga address, pointing to a father and son team - one, a 44-year-old Latvian businessman is apparently the active party, while the Erik Vanagels that features so ubiquitously as a director is his 71-year-old father. Neither responded to attempts to contact them by bne.

bne visited the listed address, which was a fairly rundown place behind a jeans store (see photo above) - not the sort of place one would expect to find someone who owns an oil rig. The man who answered the door, dressed in overalls, said Vanagels - or rather a relative of Vanagels (possibly a sister in law or sister) - used to live there "a long time ago." He had no idea where they were now.

Are Vanagels and Co. anything more than nominees fronting for Ukrainian officials? Apart from the overlapping Baltic directorships and bank accounts, one pointer to a coherent organisation is that Vanagels and Co. do not only head shell companies, but also act as directors of a wide assortment of online foreign exchange trading sites. The online High Yield Investment Product (HYIP) schemes are basically glorified Ponzi scams, such as HYIP "cherryshares" that went offline in December 2010 to the despair of its investors. The site was owned by New Zealand-registered Brooksell Universal Limited, which was under a Inta Bilder and Vanagels directorship.

In December 2009, the US Securities and Exchange Commission (SEC) cracked down on a Latvian Ponzi scheme called Rockford Funding, alleging it had taken over $10m off gullible investors in a matter of months. It transpired that investors' money had been transferred to Latvian banks Rietumu Bank, Regional Investment Bank JSG and Trasta Komercbank. Of the linked companies listed by the SEC, one was a UK company set up by Vanagel's Milltown Corporate Services and Ireland&Overseas Acquisitions - companies in the 1990s that were heavily involved in setting up suspected Ukrspetseksport fronts in Ireland and England. A second company named by the SEC, Panamanian Houseberg Impex Inc, was none other than a sister company of Waterlux AG, the owner of the ill-fated Faina, bringing together two apparently very different worlds - piracy and arms smuggling, and online scamming.

While the Vanagels network clearly poses questions about Ukraine's capacity to fight corruption, with these schemes systematically conjoined to the state, it also raises questions about the willingness of Baltic banks to comply more than superficially with money-laundering requirements, especially in a post-crisis situation where the legal easy money has dried up.

The US sent shockwaves through Baltic banking by blacklisting two Latvian banks in 2005 under the Patriot Act on suspicion of terrorist money laundering, one of which was forced to close. A diplomatic dispatch from Turkmenistan in December 2007, released by Wikileaks, bemoaned, however, that little seemed to have changed in Baltic banking, with Turkmen officials increasingly holding cash in Riga bank accounts.

Parex Banka, now state-owned after getting into trouble in 2008, confirmed to bne that Juri Vitman - one of the Vanagels' network named in the Trout Cacheris investigation - was a client manager at the bank until 2006.

The danger for the Baltics is that money-laundering activities re-import corruption to home territory. One such Latvian affair involving impounded cars was unmasked in 2008-09 and featured a security company with ties to interior ministry officials - Stab 58 - and a New Zealand front company called Geomark, which has almost inevitably, Erik Vanagels listed as director. 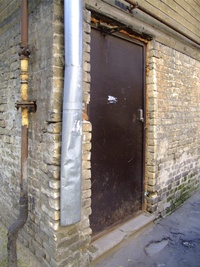