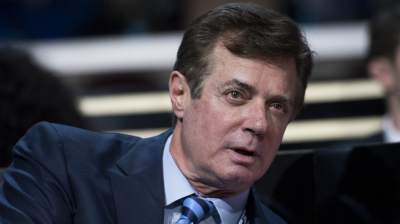 Manafort was jailed in part over receiving $12mn from "secret ledger" Ukrainian funds / wiki
By Sergei Kuznetsov in Kyiv March 11, 2019

Paul Manafort, who headed Donald Trump's presidential campaign for two months in 2016, was jailed on March 8 for hiding from US tax authorities $55mn in payments he received from Ukrainian politicians for consulting work.

Manafort was convicted on tax and bank fraud last year after a three-week trial overseen by TS Ellis, a federal judge in Virginia, who chose a sentence well below the guideline range of 19 to 24 years. The prison term was the still longest so far in a case brought by Robert Mueller, the special counsel investigating links between the 2016 Trump presidential campaign and Russia, the Financial Times reported the same day.

bne IntelliNews has been the first foreign media that named in March 2017 the most exact amount of cash channelled to Manafort in under-the-counter cash payments made by Ukraine's Party of Regions. According to Taras Chornovil, a former close associate of Ukraine’s now-fugitive ex-president Viktor Yanukovych, as much as $50mn went to Manafort, for his campaign work and lobbying for Yanukovych in the years before 2008.

This amount was way more than the $12.7mn first said to have been paid to the consultant. Chornovil refused to name his sources in an exclusive interview with bne IntelliNews correspondent in Kyiv at the time.

In 2016, the National Anti-Corruption Bureau of Ukraine (NABU) published copies of 19 pages from Yanukovych’s secret ledger in which Manafort was mentioned. A total sum of over $12.7mn was allocated to costs associated with Manafort between November 2007 and October 2012, according to the bureau, the country's main anti-graft body.

Manafort strongly denied the report at the time, saying in a statement that he never received any of those payments, "nor have I ever done work for the governments of Ukraine or Russia". However, he was forced to step down from his position as Trump’s campaign chairman shortly after the documents were published. Some experts in Kyiv believe that the leak was masterminded by the Ukrainian leadership, who openly supported Hillary Clinton during the campaign.

Lately, Manafort entered into a cooperation agreement with Mueller but the Special Counsel's office said he had breached the deal by lying repeatedly and not providing any valuable information.

Meanwhile, according to information obtained by Newsweek in November 2016 from Western intelligence in Russia, Putin later met with Yanukovych in secret near the Russian city of Volgograd. Yanukovych allegedly assured Putin there was no paper trail documenting the payments to Manafort, although Putin is said to have told associates he did not believe the Ukrainian president.

On March 9, president Donald Trump said he feels "very badly" for his former campaign chief Manafort, who was sentenced to nearly four years in prison for tax and bank fraud, according to AFP.

At the same time, Trump declared a victory in the Russia collusion investigation after his former campaign chief received an unexpectedly light sentence in a high-profile case brought by Mueller. "Both the Judge and the lawyer in the Manafort case stated loudly and for the world to hear that there was no collusion with Russia," Trump tweeted the same day.

Following the sentencing, Manafort's lawyer, Kevin Downing, said there was "absolutely no evidence that Paul Manafort was involved with any collusion with any government official from Russia." However, he did not address the wider question of whether other members of Trump's election team may have been involved with Russia, AFP reported on March 9.