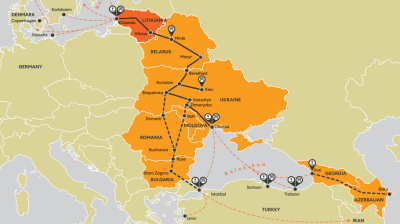 Although few in Lithuania believed it at the time, Belarus’s dictator Alexander Lukashenko has already partly followed up on his threat last year to divert Belarusian cargoes from the Port of Klaipeda, where in 2020 they amounted to 32% of the port’s total annual cargo turnover, as punishment for the country’s strong stance against his repression of domestic protests.

Earlier, in September, Belarus and Russia announced that they were working on shipping Belarusian oil products through Russian Baltic ports, even though this option is $10-15/tonne more expensive than using ports in the Baltic states, according to market participants. Lithuania’s oil terminal operator Klaipedos Nafta (KN) said on December 15 that “BNK‘s decisions may not be dictated by economic logic, but by political logic that we cannot control".

Lithuanians are now wondering what would happen if Lukashenko moved ahead with the other outlandish idea he has voiced many times on different occasions: to divert the export of Belarusian fertilizers from the Lithuanian port to Russia’s Baltics ports, Ust Luga and Primorsk, even though they are some 600 kilometres further away.

If Belarus ended this transport, it would have a devastating effect on LTG and Klapeida. In 2020, of the nearly 60 million tonnes of cargo carried by LTG Cargo, 19 million tonnes were Belarusian shipments.

According to Algis Latakas, CEO of the Port of Klaipeda, the economic activities of the Klaipeda seaport make up 6% of the national GDP and as many as 60,000 jobs depend on the port.

“The 2020 Belarusian cargo statistics were 1.5 percent up from the previous year with ca 11.8 million tons of Belarusian fertilizer shipments having been hauled through the port, while the flow of Belarusian oil products stood at around 2 million tonnes,” Latakas told bne intellinews.

In this trade, the role of Belaruskali, the Belarusian state-owned company which is the world’s biggest potash producer, is vitally important to Lithuania. Most of the fertilizer exports go via Klaipeda.

BKT, a Klaipeda-based company in charge of Belarusian fertilizer exports to more than 150 destinations all over the world, made up 22% of the port’s total annual cargo in 2020, and about 20% of LTG Cargo’s total annual turnover.

BKT has said that, with no shipments from Soligorsk, a Belarusian town where Belaruskali operates, BKT could endure just two or three days before grinding to a halt.

“Things are very bad now. All the construction projects have been effectively put on hold due to the political tumult,“ a Lithuanian real estate developer, who won a contract to build a shopping mall near Minsk, told bne IntelliNews.

Another businessman, who runs a factory in Grodno, a Belarusian town some 40 km from the Lithuanian-Belarusian border, complained that his output has decreased by half due to the instability in Belarus.

The threat to Klapeida if the EU imposes new sanctions against Belarus has divided Lithuanian policymakers, with some arguing that Lithuania’s hardline stance against Lukashenko is an act of self-harm. Lithuania has been the most vocal Baltic supporter of a democratic Belarus.

“Let’s not put our head in the sand: giving in to the demands to have Belaruskali sanctioned, Lithuania will put its head into a noose,” a former Lithuanian MP told bne intellinews on condition of anonymity.

A total of Belarusian 88 individuals and 7 entities were slapped with sanctions at the end of 2020. Another 40 Belarusian individuals were sanctioned on October 1, 2020.

How damaging for Lithuania have been some of the EU sanctions against Belarus is shown by the example of Belorus, a sanatorium in Lithuania's southern town of Druskininkai which belongs to the Belarusian state.

Swedbank has frozen the accounts of the sanatorium, leaving roughly 400 workers, most of whom are Lithuanians, out of a job.

The sanatorium itself is not on the EU sanction list, but the GHU, the main economic office of the Administrative Affairs Office of the President of the Republic of Belarus – was put on the list earlier this month.

No wonder that the proposal of having sanctions imposed on Belaruskali is rumoured to be a bone of contention of in the new Lithuanian cabinet, as is the question of how to handle Sviatlana Tsikhanouskay.  The Belarusian opposition leader fled to Vilnius last August and has been continuously calling for EU sanctions on more Belarusian state companies, including Belaruskali.

The former Farmers and Greens led Lithuanian government emphasised that, although it supported sanctions against the Lukashenko regime, it refrained from talking about any sanctions against Belarusian companies. But with a new Lithuanian government that includes some hawkish Conservatives, a tougher stance on Lukashenko is very much more likely now.

Some top politicians, including the new economy minister Ausrine Armonaite, MEP Ausra Maldeikiene and reportedly Gabrielius Landsbergis, the foreign minister and grandson of the architect of the Lithuanian independence, Vytautas Landsbergis, have maintained that “there is a price” that Lithuania has to “pay” for liberty in Belarus – including EU-initiated sanctions against Belaruskali.

Temporary economic hardships in Lithuania due to sanctions on Belarus are justified, Economy and Innovation Minister Ausrine Armonaite said on January 8.

“…Any sanctions – be it against Belarus, Russia, Iran or any country in the world – have economic consequences. But they are not imposed for nothing; [they are imposed] to protect human rights,” Armonaite said.

But others, including President Gitanas Nauseda and Prime Minister Ingrida Simonyte, have so far indirectly disapproved of the idea or avoided a straight answer on sanctions on the Belarusian firm.

Nauseda stated in early January that any application of EU sanctions against the Belarusian regime should not adversely affect Lithuanian citizens or businesses.

The president visited the Klaipeda port during his presidential campaign in 2019 and he reportedly assured the port of his support, regardless of the potential adverse geopolitical developments in the region.

Faced with more potential blows from Belarus, some Lithuanians are trying to see a silver line in the gloom. LTG, which has already lost the BNK oil contract and would be further damaged by the loss of Belaruskali’s business, is trying to diversify, particularly into Ukraine.

Egidijus Lazauskas, CEO of subsidiary LTG Cargo, has said he sees opportunities to contribute to the Ukraine’s push to cut carbon emissions by expanding rail services and his company has established a subsidiary there.

“LTG Cargo Ukraine will first offer rolling stock rental, forwarding, and other freight transportation services as part of its expansion strategy. Our new line of business is a planned strategic step in the international development in Eastern and Central Europe, with which we aim to expand the range of activities and increase competitiveness in the region,” Lazauskas said recently.

In the long run, the Lithuanian company’s objective is to become an international freight carrier in Ukraine, where the annual volume of freight transported by rail reaches about 300 million tons – six times more than in Lithuania.

As part of its international expansion, last summer LTG Cargo also established a subsidiary in Poland, LTG Cargo Polska, which, together with its partners, will develop freight transportation in Poland.

Nor does the end of the BNK contract mean that LTG has stopped transporting Belarusian oil.

“And when it comes to Belarusian oil transportation, we’re still providing BNK our services, although not being contractually-bound: in January this year we will haul ca 60 000-70 000 tonnes of Belarusian oil products. Therefore, it would be improper to talk of severing the ties,” Martynas Burba, LTG Communications officer, told bne IntelliNews.

Another silver lining is the ongoing exodus of Belarusian IT companies to Lithuania and the other Baltic countries, which could substantially contribute to the local economies.

Many Belarusian companies, such as EPAM Systems, Wargaming, Flo Health, Coherent Solutions and Godel Technologies, have moved to Lithuania since the onset of protests in Belarus last August.

According to the data from Lithuania's foreign investment promotion agency Investuok Lietuvoje (Invest Lithuania), more than 60 Belarusian companies are currently moving their business to Lithuania or are considering doing so.

Visas have been made easier and cheaper for Belarusians, and the Lithuanian economy ministry has now worked out legislative amendments aimed at facilitating the shift of more Belarusian businesses to Lithuania, particularly from its exciting IT sector.

Government officials expect the Seimas, the Lithuanian parliament, to consider the amendments to the Laws on Investment and Employment during its spring session. They stipulate that such companies will have to commit themselves to invest at least €1.5 million in Lithuania, to create at least 20 jobs and to pay wages equal to at least 1.5 times the average wage in a specific municipality.