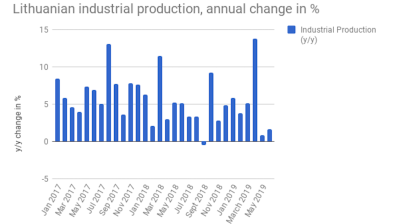 Lithuanian industrial production grew 1.6% y/y in June on a calendar-adjusted basis, according to data from Statistics Lithuania released on July 23.

The reading marks a pick up of 0.8pp in the annual growth rate after output grew just 0.8% in annual terms in May. A more pronounced growth of industrial production is expected to return in the coming months, keeping economic growth on the steady expansion trajectory.

The Lithuanian GDP accelerated growth to 3.8% y/y in the first quarter (adjusted terms), adding 0.1pp to y/y reading in the fourth quarter of last year. The Baltic state’s economic expansion is expected to moderate to 2.7% in 2019 overall, from 3.4% in 2018.

In monthly seasonally and working day-adjusted terms, industrial production grew 1.8% in June while unadjusted data recorded falls of 1% y/y and 1.8% m/m. In nominal terms, the Lithuanian industry turned out €1.9bn worth of product in the sixth month in current prices.

The feeble adjusted annual growth in June owes to production expanding 1.5% y/y in the most-weighted manufacturing segment, compared to a growth of 0.6% y/y the preceding month.

Output in the utility segment grew 6.6% y/y in June; that compares to an expansion of 4.3% y/y in April.

The water supply, sewage treatment, and waste management segment saw production gain 0.5% on the year in June after a growth of 2.2% y/y the previous month.