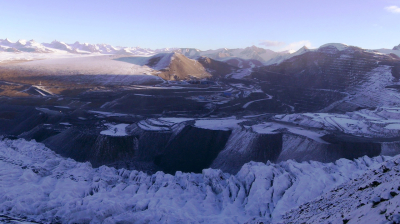 Kyrgyzstan and Centerra Gold have been locked in a bitter dispute over profit-sharing over the Kumtor mine.
By bne IntelliNews June 15, 2016

Kyrgyz President Almazbek Atambayev has ordered state prosecutors to probe the legality of investment agreements signed with Canada’s Centerra Gold in 2003, 2004 and 2009 amid suspicion the deals might have involved corruption, the president’s office said in a statement.

Centerra Gold operates Kyrgyzstan’s flagship gold mine Kumtor, the country’s largest taxpayer and employer, which accounted for 6.8% of GDP in 2015. The probe, coming days after Centerra Gold’s former chief executive Leonard Homeniuk alleged that past payments made by the company's mining operation in Kyrgyzstan may have been misdirected, will further deteriorate the already rocky relations between the Kyrgyz government and Centerra Gold.

Bishkek and Centerra Gold have been locked in a bitter dispute over profit-sharing that has recently escalated, prompting the Canadian company to turn to international arbitration.

The Kyrgyz government perceives the Kumtor restructuring deal reached under former president Askar Akayev in 2003 – in which the country traded its two-thirds stake in Kumtor for a one-third stake in Centerra – as “unfavorable for Kyrgyzstan”. The authorities suspect that corruption played a role in setting up these “unfavorable” terms.

In a letter written to Kyrgyzstan’s General-Prosecutor’s Office, Homeniuk says “several times per year” the two men and various state agencies made requests “for all sorts of financial contributions for various purposes, including for political elections”. He called the requests “sometimes very significant, more than $200,000 in a given month”.

The State National Security Committee (SNSC) arrested former manager Dastan Sarygulov on June 13 and in a surprising twist has linked the alleged corruption probe to a coup plot. Sarygulov was among many former politicians to be called in for questioning in March over an alleged coup plot. Unlike three of his suspected co-plotters, who remained in jail, Sarygulov was released under house arrest.

“Investigators do not rule out the possibility that efforts to destabilise the situation in the country in March and May were connected with the government’s active investigations into corruption schemes at the Kumtor project,” the SNSC’s said in a statement.

The security services allege that coup plot suspects were acting under threats from relatives and allies of the deposed and exiled Akayev as well as another former president Kumanbek Bakiyev, who faced the same fate as Akayev later in 2010.

In response to the probe, Centerra expressed confidence in the deals it made with Kyrgyzstan. “They [the deals] were negotiated openly, fairly and transparently and were approved by the Kyrgyz government, parliament and the Kyrgyz supreme court,” company spokesman John Pearson said, according to Reuters. Earlier this month, Centerra's chief executive officer blamed the escalating conflict on Kyrgyz government’s desire for a bigger slice of profits as the economy slowed.