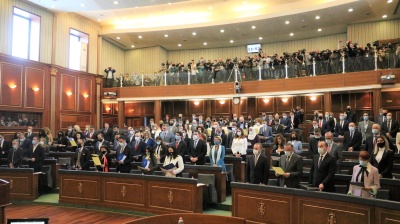 By Valentina Dimitrievska in Skopje March 22, 2021

This will be the second government led by 46-year-old Kurti, whose first government at the beginning of 2020 lasted just a few months. He returns to power after his party, the left-wing nationalist party Vetevendosje, won a resounding victory in the February 14 snap elections.

Vetevendosje, which ran jointly with the list of acting president Vjosa Osmani in the election, won 58 seats in the parliament and formed the government with the support of minorities’ parties.

In the vote on March 22, 67 MPs supported the Kurti cabinet and 30 voted against in the 120-seat parliament, broadcaster RTK reported.

107 MPs were present at the session. Opposition MPs left the assembly immediately after the swearing in session.

Among the key positions, the finance minister in Kurti’s new government is Hekuran Murati while the foreign affairs ministry will be led by Donika Gervalla, who is also appointed deputy PM.

The interior minister is Xhelal Svecla, the economy minister is Artane Rizvanolli, while the ministry of defence will be led by Armend Mehaj.

In total, the cabinet will have 15 ministers and three deputy ministers.

Speaking in front of MPs before the vote, Kurti promised that the coronavirus pandemic will be the top priority for the new government, which he said will provide vaccines for 60% of the population this year.

When it comes to the dialogue with Serbia, he indicated a tough stance, underlining that without "recognition of the reality — the independent Kosovo — there can be no normalisation of relations between the two countries."

Kurti said Kosovo has open issues with Serbia that need to be resolved through dialogue, but said no progress can be made in the dialogue if there is not progress in resolving the fate of missing persons in Kosovo, referring to people killed during the war with Serbia in 1998-99.

Kurti also said that there will be no tolerance for abuse of office and public money, and he reminded his ministers that they are supposed to “work and not to be rewarded”.

Prior to the vote on the government, Kosovo’s parliament held its constitutive session and elected Glauk Konjufca from Vetevendosje as speaker of the assembly.

Kosovo’s president is appointed by the parliament, and Vetevendosje plans to back Osmani as the new president. However, so far, according to media reports, the government has failed to secure the two-thirds majority for Osmani’s election.

EU downgrades its estimate of Russian troops on Ukraine’s border to 100,000 but tensions remain high
6 hours ago
PM scandalises Bulgarians by wearing skimpy shorts to present new government
7 hours ago
Strong hopes Georgia's political crisis is over after EU brokered agreement
14 hours ago
Bulgaria’s outgoing government under scrutiny over sudden hike in budget deficit
1 day ago
Team Navalny pulls the trigger on the next big demonstration scheduled for April 21
1 day ago