King of the Hungarian fertiliser market has operating licence suspended 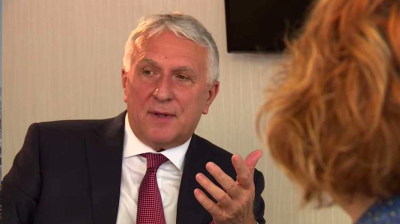 The authorities suspended the operating license of one of the largest fertiliser plants in Hungary owned by Laszlo Bige on June 7. The businessman said he suspects revenge by the competition and in particular one person, but he did not go as far as naming anyone.

Bige was born in the Romanian town of Oradea, but moved to Hungary in 1984, before the change of regime. He privatised state-owned Tisza Chemical company in 1997 during the Socialist era. In 2002, when the Socialists returned to power he acquired MOL's subsidiary Nitrogemuvek, which since has become the largest fertiliser company in Hungary controlling more than half of the market.

Bige's Holding has 13 production basis in Hungary and reported sales of HUF88bn (€250mn) in 2017. The company has invested €450mn between 2014 and 2017 in expanding capacity and rolling out new products. Bige is one of Hungary’s richest people with an estimated wealth of HUF220bn.

On Friday, the local unit of the disaster management directorate in Central Hungary uncovered irregularities at the Szolnok plant and said that safe operation is not guaranteed. The plant may remain closed for up to 90 days, local media reported.

Laszlo Bige told commercial broadcaster RTL Klub over the weekend that if the situation is not resolved by next week, the factory, providing work for 250 people, could be closed for good. Authorities found only minor irregularities, which should not have warranted such a strict measure, he noted.

Bige has found himself in the middle of large-scale investigation coming from many fronts in the last 12 months.

The authorities raided the factory in November with hundreds of officials from the police, the fire and disaster management departments, which seemed like an excessive presence given the scope of the potential offence.

An investigation was launched into the possible violation of waste management rules and other crimes, but the company did not receive any fines afterward and it cooperated with authorities.

Bige's factories have become a regular target for the authorities in the last half year.

The competition watchdog GVH also launched a proceeding against Nitrogenmuvek last year on the suspicion it colluded with other companies in setting prices.

Hungary’s fifth richest businessman told RTL that he suspects personal revenge behind the coordinated attacks against him, but he would not give out any names.

Local media reminded readers of the animosity between Bige and Sandor Csanyi, chairman-CEO of Central Europe's leading lender OTP. Even as the 57-year-old businessman used financing from OTP to privatise the petrochemical company and later buy Nitrogemuvek, there was one occasion when OTP withdrew working capital financing for the company. It came in 2008, just at the time of the economic crisis. The Socialist-led government threw a lifeline to Bige though loans from state development bank MFB.

Csanyi, who tops the richest person list, has become the biggest domestic investor in agriculture and he is now the biggest landowner in Hungary. He runs the vertically integrated agribusiness Bonafarm which posted HUF266bn in revenue last year.

The company owns meat processor Pick, the maker of the renowned salami of the same name since the 1870s. Hungary's iconic meat producer has recently announced plans to add a new plant at its base in Szeged, south Hungary.

Csanyi’s agribusinesses rely heavily on fertilisers produced by Nitrogenmuvek, which has fuelled speculation that the OTP leader would be interested in taking over Bige’s fertiliser business, but he categorically denied these rumours.

The two businessmen's relation to the current political leadership could also explain the ongoing saga of Bige and foreshadow the possible outcome.

Whereas Csanyi is closely aligned with the ruling Fidesz party and Prime Minister Viktor Orban, the same can not be said about Bige, who made his fortune during the Socialist-led governments. He has few if any friend in the Fidesz business and political hierarchy.

In a 2014 interview, he said he tries to establish equal distance from political parties. "Governments come and go, but I am here to stay," he said.