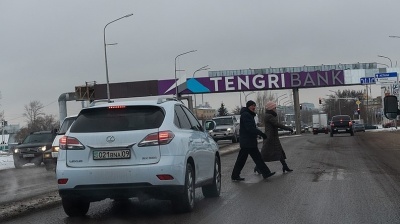 End of the road for Tengri Bank.
By Almaz Kumenov for Eurasianet February 18, 2021

There was a time when Kazakhstan’s authorities pulled out all the stops to keep banks from going under. Those days are in the past.

Instead, the government is allowing dubiously administered minnows to wither in the hope that mid-ranking players can grow and restore some health to a chronically trouble-ridden financial sector.

The disintegration of Tengri Bank, a lower-tier lender, came to its conclusion this week as a court order for its operations to be terminated came into force. Two days later, on February 17, media were reporting that the bank’s former chairman, Yerzhan Shaikenov, had been detained in connection with ongoing investigations into the alleged embezzlement of more than 5.4 billion tenge ($12.6mn).

The alarm bells began ringing in September, when the banking regulator stripped Tengri Bank, which was 42%-controlled by Indian government-owned Punjab National Bank, of its operating licence. Nominally, that happened after the bank’s share of non-performing loans (NPLs) came to exceed 80% of its overall credit portfolio.

All banks operating in an underperforming economy, like the one Kazakhstan is experiencing now, run the risk of being weighed down by bad loans, but probing by financial regulators revealed a more sinister picture at Tengri Bank.

“Most of the problematic loans were issued, in the period from 2015 to 2017, to persons related to the bank’s Kazakh shareholders and they accounted for 58% of the bank's loan portfolio,” they said in their statement.

A massive outflow of deposits had by early 2020 compounded the bank’s liquidity troubles, to the point that it was unable to fulfil basic fiduciary obligations. In March, the regulator demanded that major shareholders recapitalise the bank to tune of around 23 billion tenge (about $53mn at that time), but they failed to abide by that injunction.

In November, two key executives were arrested as part of the investigations that have now also caught up with the ex-chairman, Shaikenov.

Yet another lender, AsiaCredit Bank, lost its operating licence on February 12.

The Financial Market Regulation and Development Agency said its decision was based on the bank’s systematic policy of ignoring supervisory measures and failing to comply with demands for additional capitalisation.

The volume of the bank's assets are practically equivalent to its outstanding loan portfolio of around 45 billion tenge ($107mn). Of those loans, around 70% have been classed as non-performing, meaning they had been overdue for more than three months.

That these banks are allowed to sink marks a change of thinking since the times of president Nursultan Nazarbayev, who grumbled in 2018 that the government had spent more than $9bn injecting liquidity into stressed banks.

Moody’s Investor Services has offered a positive verdict on the elimination of Tengri Bank and AsiaCredit Bank from the scene, saying it represented a good example of the authorities’ efforts to clean up the banking system. The disappearance of weak banks will create more space for mid-ranking lenders to compete with giants like Halyk Bank, which accounts for 32% of the market in terms of assets, Moody’s said.

Kazakhstan’s banking system, as characterised by Moody’s, is concentrated at the top and fragmented at the bottom. The top 10 players have a combined market share of 86%. The remaining 16 banks, which include AsiaCredit Bank, contend for the crumbs.

A scythe-wielding banking regulator can go a long way toward boosting competitiveness, but the propensity for shady dealing among many of Kazakhstan’s bankers may be a harder nut to crack.