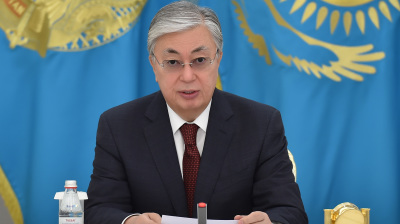 Kazakhstan's President Kassym-Jomart Tokayev addressed the nation on state television on March 16. He mentioned that Kazakhstan has $90bn in reserves to support its economy, but made no mention of the exchange rate.
By Kanat Shaku in Almaty March 17, 2020

The Kazakh national currency, the tenge, sank 6.6% against the dollar in the interbank market on March 16, hitting a new all-time low of KZT434.59, according to figures from Kazakhstan’s central bank.

The tenge plunged after the central bank, the National Bank of Kazakhstan (NBK), said it would stick to a free float regime instead of supporting the currency with interventions as it promised when oil prices crashed last week. The national lender’s governor, Yerbolat Dosayev, said last week that the regulator stood prepared to intervene in the foreign exchange market and take measures to ensure market stability. The central bank announced on March 6 that it sold $557.3mn on the domestic market in February alone as it intervened to combat a spike in demand for hard currency caused by the drop in world oil prices seen at the end of February after Russia and Saudi Arabia failed to agree an OPEC+ deal on limiting crude production. The move was comprised of $94.8mn from the central bank’s own reserves and $462.5mn from the National Fund.

“Maintaining the exchange rate at the previous levels would inevitably have led to a significant decline of the country’s gold and foreign currency reserves, [increased] dollarisation, a liquidity crisis and further deterioration of the situation in the economy,” the central bank quoted its deputy governor Aliya Moldabekova as saying in a statement on March 16.

The regulator kept its policy rate unchanged at 12% on March 16. It noted that there was a high risk of inflation exceeding the 6% target range ceiling in 2020 due to the combined effect of the coronavirus (COVID-19) pandemic and the sharp weakening of oil prices. The regulator slashed its outlook for the average oil price for this year to $35, down from $60. Demand for oil has been hit hard by the worldwide economic impact of the coronavirus crisis.

Kazakh President Kassym-Jomart Tokayev addressed the nation on state television on March 16. During his address, he mentioned that Kazakhstan has $90bn in reserves to support the Kazakh economy, but made no mention of the exchange rate. He also said that the government would ensure price stability on food staples and other necessities.

Tokayev gave himself emergency powers on a range of issues, including foreign trade and taxes along with the setting of maximum prices of important goods and services.

Retail sales under lockdown across Central and Eastern Europe are sinking

Borealis pulls out of $6.8bn plan to build petrochemical plant in Kazakhstan
Business rallies to help in fight against coronavirus across Eastern Europe and Central Asia
Retail sales under lockdown across Central and Eastern Europe are sinking