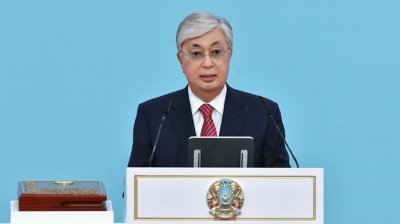 President Kassym-Jomart Tokayev was officially sworn in for his second term on November 26. / Akorda.kz
By bne IntelliNews November 27, 2022

Dozens of people gathered in the Kazakh capital Astana to protest against the inauguration of President Kassym-Jomart Tokayev, as he was officially sworn in for his second term on November 26.

The authorities swiftly cracked down on the protest, however, and it only ended up lasting for around an hour, according to various local media reports and Telegram-channels that have posted videos of the event. The videos of the short-lived protest featured men wearing red bandanas getting into altercations with Kazakh police and being forcefully detained by them.

The protest was reportedly organised by Kazakh businessman Marat Abiyev and his group that refers to itself as “Architects of the Future”. Based on the exclamations made by Kazakh police in the videos of the late night protest, Abiyev himself may have attended the event and was possibly detained along with many people in the crowd.

A policeman in one video posted on Telegram appears to shout “did you get Abiyev?” to which another man replies “yes, I got Abiyev”.

The red bandanas worn by the men appear to belong to an Abiyev-led nonprofit organisation, dubbed Genesis, which has featured photos of its red bandanas in its Instagram posts. The organisation’s purpose is unclear.

According to local media reports, Abiyev came into conflict with the Kazakh authorities in May this year, when he attempted to organise a "concert" in Astana,  with buses full of his supporters arriving to the city to attend the event. The authorities had canceled the rally.

The Genesis organisation claims to have branches across Kazakhstan and makes social media posts focusing on economic anxieties of Kazakh citizens, such as the rapid 20% food price inflation seen this year amid global supply chain disruptions and the war in Ukraine.

Tokayev secured a second term in a snap election earlier this month, where his victory was seen as a foregone conclusion. The official preliminary result gave him 81.3% of the vote, but almost all critics were agreed that no substantial candidates were allowed to stand against him.

The authorities warned ahead of the vote of repercussions for holding rallies on election day. Officials remain nervous about any rekindling of countrywide protests following the "Bloody January" events that shook the country to its foundations at the beginning of the year, officially claiming 238 lives.