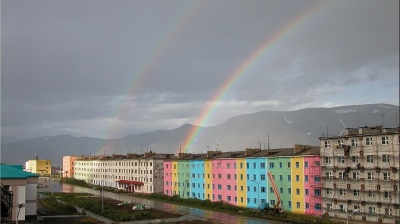 Russia has substantial infrastructure plans for Chukotka Region and that means a bigger bill for KAZ Minerals. (Pictured is Egvekinot)
By Kanat Shaku in Almaty November 19, 2020

Kazakh copper miner KAZ Minerals on November 18 said risks around its Baimskaya copper project in Russia's Chukotka Region have risen due to new infrastructure plans for the region passed by the Russian government.

KAZ Minerals is currently discussing the provision of transport and power infrastructure in the Chukotka Region with the Russian government - the company may be liable to pay for the costs.

The Ministry for the Development of the Russian Far East & Arctic recently approved a multi-party complex development plan for new infrastructure in the region. The plan was submitted by the ministry on Novemebr 18 for approval by Russian Prime Minister Mikhail Mishustin.

"Under the CDP, KAZ Minerals will now take responsibility for a portion of the infrastructure capital costs. Together with a revised cost for the tailings storage facility and the impact of an approximate one year delay to the project schedule, the capital construction budget for the Baimskaya project is now estimated to be close to $8bn," KAZ Minerals said.

Due to changes in the infrastructure plan, KAZ Minerals said its Baimskaya project's bankable feasibility study is set to be delayed until the first half of 2021.

"The complex development plan for Chukotka submitted today within the Russian government has resulted in higher infrastructure costs and a delay to the bankable feasibility study," senior independent director Michael Lunch-Bell said.

The Baimskaya project is now seen as commencing production by end-2027 and has an annual ore processing capacity of 70mn tonnes per annum.

KAZ Minerals and its subsidiaries engage in mining and processing copper and other metals in Kazakhstan and Kyrgyzstan. The company operates the Aktogay and Bozshakol open pit copper mines in Kazakhstan along with three underground mines. It is also developing the Bozymchak copper-gold mine in Kyrgyzstan.

KAZ Minerals' fifth biggest investor RWC Partners, which holds just under 3.3% of the company’s shares and CFC Management - a Russia-based investment advisor that represents Maxim Vorobyev and other minority shareholders that jointly control approximately 3.6% of the firm’s shares - have both said they intend to vote against against a £3bn all-cash buyout offer to take the Kazakh copper miner private. The offer is connected to the Baimskaya copper mine bought by KAZ Minerals in 2018, as it “would be best undertaken away from public markets as a private company”, according to the miner.