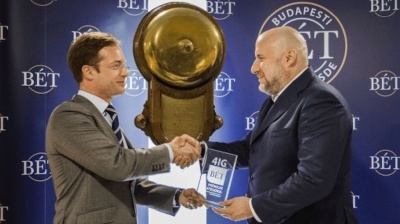 Budapest Stock Exchange (BSE)-listed IT company 4iG has established a company that aims to launch and operate Hungary's first satellite suitable for commercial, governmental and scientific research missions in 2024, it announced on August 17.

4iG holds a 51% controlling stake in the company, called CarpathiaSat Magyar Urtavkozlesi, that was established with a capital reserve of HUF365mn (€1.05mn) and a share capital of HUF5mn.

Terrestrial broadcasting company Antenna Hungary has a 44% stake in the venture and New Space Industries holds 5%. CarpathiaSat will have the right to operate in a geostationary orbit for 20 years from 2024, 4iG said.

Hungary's most powerful oligarch, Lorinc Meszaros, acquired the majority stakes in 4iG in 2018 through his flagship firm Opus. The company was flooded with state orders, a well-known recipe for success for firms acquired by Meszaros after taking ownership of companies.

4iG was the best performing stock on the Budapest bourse as its price rose six-fold in 2018. The share price retreated from a record HUF1,000 a year ago to HUF665 on Monday.

A year ago Meszaros sold his stake to his business partner, former CEO of Konzum Gellert Jaszai, who now holds more than 50% of the shares.

The strategic goal of 4iG is to become the leading IT and info-communication company not just in Hungary, but in the broader CEE region, and to establish a dominant position in the telecommunications sector, 4iG said in a statement.

The venture aims to collaborate with domestic and international companies with significant experience in the industry as well as with Hungarian universities and researchers, he added.