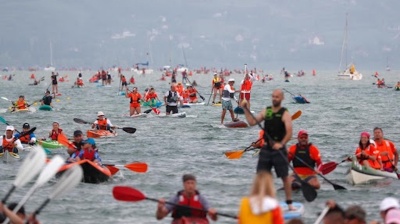 Hotels around Lake Balaton registered 2.2mn guest nights in August of the total 5.4mn across the country.
By bne IntelliNews September 17, 2020

Around 1.5mn domestic tourists stayed in commercial accommodation in August, 300,000 more than in the same period a year earlier, according to data from the Hungarian Tourism Agency on September 16. Except for June, overnight stays by locals outpaced last year's level.

Hungary’s tourism sector was on track for another record year in 2020 before the pandemic hit the country. The sector, which accounts for 13% of GDP and provides a livelihood for 400,000 people, got in a critical situation overnight, CEO of MTU Zoltan Guller told local media.

Campaigns to promote domestic tourism have produced results as Hungarians overwhelmingly choose domestic destinations. From the second half of July until the end of August hotels at Lake Balaton operated at full capacity.

The pandemic has seen a surge in tourism to Hungary's popular Lake Balaton, where Hungarians spent a total of 2.2mn guest nights last month.

More than 90% of Hungarians traveled to the countryside, which also means that the turnover of  accommodation establishments in Budapest remained at a low point throughout the summer.

Budapest hotels are operating at 10-20% occupancy rate as they largely depend on foreign tourists.

Detailed figures by the statistics office will be published on October 7, but from this year lodgings are required to provide data on their business to the National Tourism Data Service Centre on a daily basis.