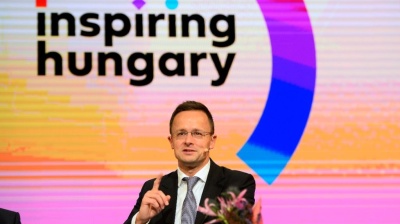 By Levente Szilagyi in Budapest October 1, 2019

Hungary rolled out a new investment incentive system from October 1 with the aim of attracting more technology-oriented investments, Minister of Foreign Affairs and Trade Peter Szijjarto said at the Inspiring Hungary conference organised by state invesment promation agency HIPA on October 1. Job creation will no longer be a precondition for subsidies under the new scheme.

Hungary has reached the limit of new job creation with employment standing at an all-time high of 4.5mn, he said, which requires a shift in economic policy. The goal is no longer to create workplaces but to strengthen technological development and R&D, he said. Some 70% of new investments are high-tech, which ranks Hungary second in the EU after Denmark.

The government will offer foreign investors tax breaks and cash subsidies amounting to up to 50% of project value in twelve counties. In more developed regions, the ratio will be between 15% and 25%.

The government has two tools to attract high value-added jobs: ongoing education and training, and financial incentives. Measures such as allowing companies to deduct double their R&D spending from their tax base, or to halve payroll taxes on staff involved in R&D all support bringing such jobs to Hungary, he added.

In terms of FDI and exports, Hungary has broken records every year since 2013, he added.

Last year 98 investments with a combined value of €4.3bn had been undertaken in Hungary last year, creating 17,000 jobs.

In the first nine months, foreign investments reached €2.4bn with South Korea ranked first as the country is leading the paradigm shift in the automative industry and in new EV battery technology.

The largest EV battery producers are all present in the country, including Samsung, which has the largest plant outside South Korea near Budapest. The company is planning to expand its base in the near future, bne IntelliNews learned.

Hungary also hosts the largest combustive engine factory in the world, operated by Audi in Gyor, which turns out an annual 2mn engines.

Turkey’s banks ‘hire Ernst & Young to analyse forming asset management company for billions in bad debt’
23 hours ago
Coronavirus fear spreads across Iran, Iraq, Armenia and Azerbaijan after Qom deaths
1 day ago
Turkey ‘asks US for Patriot missiles to help counter Russia-backed Syrian troops’
1 day ago
Russian investor to give up Chisinau International Airport
2 days ago
Hot spring looms in Albania as president urges people to rise up against government
2 days ago