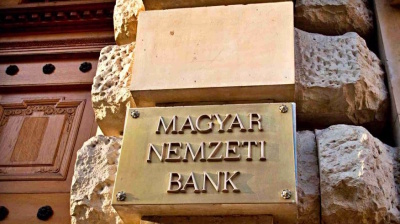 The forint appreciated 3% against major currencies after the central bank's announcement, the largest intra-day gain in more than 10 years. / bne IntelliNews
By Tamas Csonka in Budapest October 14, 2022

The Hungarian National Bank (MNB) was forced to introduce a number of emergency measures on October 14 to stabilise the financial markets and to halt the decline of the forint, which has broken record lows several times this week. The forint appreciated 3% against major currencies after the announcement, the largest intra-day gain in more than 10 years.

The Monetary Council introduced a new 1-day deposit facility with an interest rate of 18%, which will effectively replace the base interest rate of 13% as the main monetary tool. The policy will stay in place until the forint stabilises, Deputy Governor Barnabas Virag said at a briefing on Friday after the meeting.

Policymakers raised the overnight collateralised loan rate – the top of the interest rate corridor – by 950bp to 25.0%, effective from Friday morning.

The MNB is also introducing a one-day (T/N) FX swap instrument at 17%, designed to ensure the rapid and flexible implementation of tighter monetary conditions in the swap markets.

Policymakers said that MNB is ready to use every instrument in its monetary policy toolkit to ensure market stability in the current turbulent period and "existing challenges warrant the use of targeted and temporary instruments".

At an online press briefing, Virag blamed the forint’s decline on rising FX needs to cover rising energy bills and increasing risk aversion and the increase in short positions against the forint.

The MNB also announced that the central bank would cover the "lion's share" of the FX needed to pay energy imports until the end of the year from reserves. The measure will have a substantial impact on the FX market as Hungary’s current account balance, except energy, is showing a surplus, Virag said.

The MNB has remained silent this week as the forint was breaking new records. The central bank has no official exchange rate target and generally does not comment on currency movements. In the past, its low international reserve stock prevented it from direct market interventions to prop up the currency, unlike its Czech peer.

Virag defended the MNB’s decision to end the tightening cycle at the last meeting two weeks ago, saying the current 13.0% base rate is "capable of managing fundamental inflation trends". The MNB had raised the base rate by 1240bp during a 16-month tightening cycle.

Virag said the September CPI data was "fully in line" with projections, while core inflation was "lower than expected". Inflation may "rise slightly" in the coming months, but "internal and external factors show the turning point is approaching", he added. Headline inflation accelerated to 20.1% y/y in September from 15.7% in the previous month, while core inflation shot up from 19% in August to 20.7%.

The next phase of the efforts to keep monetary conditions tight and improve monetary policy transmission will allow the MNB to react to marked changes to risk premiums in the fast-changing wartime environment with the help of flexible instruments, tenders and FX swap instruments, he added.

The stock of overnight deposits had fallen to less than a third, while more than half of liquidity was in long-term deposits, a main target of the central bank.

The 3-, 6- and 12-month Bubor (Budapest Interbank Offered Rate) rates, which serve as a reference for a third of existing mortgage loans and most of the corporate loans, jumped to 16% after the announcement, paving the way for forint lending rates of 20% or higher, financial website Portfolio observed.

The Hungarian forint gained more than 3% against major currencies on Friday, the largest intraday gain in more than 10 years. It was trading 11-13 units below its peak versus the dollar and the euro. The EUR/HUF was trading at 415, up 13% this year, and USD/HUF at 426, some 31% lower than at the start of this year.