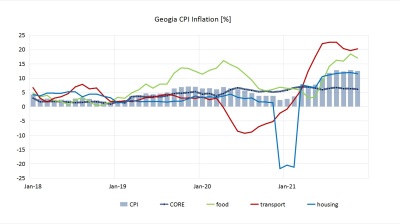 By Iulian Ernst in Bucharest December 7, 2021

Consumer prices in Georgia increased by only 0.6% in November after the 1.3% leap in October, but the annual inflation remains high at 12.5% y/y, the statistics office Geostat announced.

On the upside, core inflation has eased for the third month in a row from 6.7% y/y in August to 6.1% y/y in November.

The main inflation driver remained the same in November, although their dynamics moderated in the month: the prices of food (+0.6% m/m) and transport (+1.7% m/m), which each contributed 0.22pp to the overall 0.6% m/m inflation rate. Notably, the cost of housing, mainly including utility fees, edged down marginally compared to October.

The price of utilities (housing prices) increased by 11.5% y/y and contributed 1.7pp to annual inflation.

The housing price, subsidised during the last winter season, will be responsible for the low base effect that is likely to highlight the high inflation through the coming months.

The National Bank of Georgia (NBG) in its latest monetary policy decision on October 27 kept its key refinancing rate unchanged at 10% for the second time in a row, after raising it by 0.5% to its highest level in 13 years in August.

The central bank stressed that it is keeping the monetary policy stance tight, as increased inflation remains a challenge for Georgia.

According to the central bank, the high inflation was mainly a result of one-off factors, such as significant increases in prices of food and oil on international markets. The NBG said the upward pressure on prices was also driven by the rapid growth of international transportation costs.

Georgia’s exports went up by 25% y/y in June

At the end of July, 240,706 Czechs were seeking employment. This figure is 9,397 more people than the previous month, translating into a rise of 0.2%.