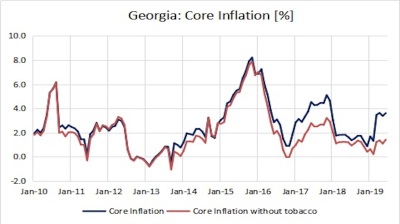 The annual headline inflation in Georgia eased to 4.3% y/y in June from 4.7% in the month before, the statistics office Geostat announced. Georgia’s central bank targets 3% annual inflation and has maintained a hawkish 6.5% refinancing rate, after having cut it to 6.75% in January and 6.5% in March.

Although preliminary data indicates increased economic growth in Georgia, demand side pressure on inflation remains weak, the central bank said when explaining its June 12 decision to maintain the rate. The growth of credit activity remained moderate, it added. Since early 2019, consumer loans and mortgages in foreign currency have declined.

The prices of food and non-alcoholic beverages, mostly responsible for the rise of the consumer prices recently, dropped by 3.9% in June compared to April, but remain 6.5% up y/y and they contributed 1.94pp to the overall 4.7% annual inflation.

Consequently, the price of alcoholic beverages and tobacco increased by 20.1% y/y as of June (+0.2% versus April) and contributed a significant 1.33pp to the overall 4.3% y/y headline inflation in the month.

Hungarian forint slips to all-time low against the euro
17 hours ago
Russia’s industrial output grew 2.1% on the year in 2019 and 8.9% on the month in December
17 hours ago
Polish retail sales accelerate growth in December
1 day ago
Russia's Watcom shopping index ends 2019 on five-year high as consumption recovers
1 day ago
Ukraine’s retail sales up 10.5% in 2019
2 days ago