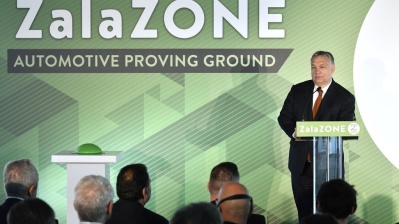 The first phase of the ZalaZone test track for self-driving vehicles in Western Hungary was opened on May 20 in a ceremony attended by Prime Minister Viktor Orban. The ZalaZone race track is a HUF45bn (€138mn) government-funded project, which will be completed by 2020.

The Zalaegerszeg race track, one of its kind in the CEE region, has been specifically designed for the testing of autonomous, connected, and electric vehicles, including both passenger and larger commercial trucks up to 40 tonnes.

The track lies on 265 hectares with a 20-hectare facade concept urban area and will be the largest such urban proving ground in Europe.

The test track not only services OEMs and their suppliers but is also an incubator/accelerator for SMEs and start-ups as well as a university based R&D centre.

The ZalaZone project is one of the first tickets Hungary has bought into the future of digital economy, Orban said at the ceremony, adding that the centre could grow into a regional hub, possibly with a European radius.

It is in the national interest that the 620 car manufacturing companies active in Hungary think of the country not simply as a production site but as a development hub, an opportunity to gain a competitive edge, said the prime minister. Hungary has invested some HUF800bn into vehicle development research centres in the current EU budget cycle, he added.

The track's 2km handling course, 300m-diametre dynamic platform and multi-surface braking platform were completed in the first phase of the project, as were five hectares of the track's smart city, a 2,000 sqm garage and a conference room that can accommodate 300 people, said ZalaZone ministerial commissioner Laszlo Vigh.

ZalaZone is also a test ground for 5G technology. Vodafone launched Hungary's first live and permanent 5G base station connected to its network and using its own licensed frequency to support the testing of future vehicles. Participants at the opening ceremony could try out a remotely controlled car steered from the remote driver's seat next to the course via a 5G connection.