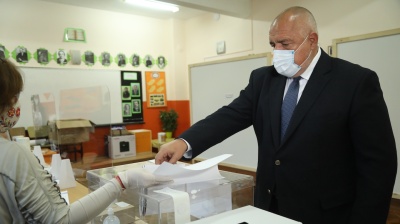 Alpha Research put Borissov’s Gerb party on 25.7%, making it the largest party in the new parliament. But with Borissov’s current partner, the far-right VMRO, barely scraping into the parliament, and the ethnic-Turk Movement for Rights and Freedoms (DPS) in fourth place with 11% of the vote, the long-serving prime minister has no obvious coalition partners that would give him enough support for another term in power.

Popular showman Slavi Trifonov’s vehicle There Are Such People is third on 15.2% with sociologists saying that the party might come in second when more votes are counted. Following closely after the DPS is the centre-right reform-oriented Democratic Bulgaria with 10.4%; the party might eventually overtake the DPS after all votes, especially those from abroad, are counted.

Stand Up! Thugs Out!, the coalition between former ombudsman Maya Manolova and the Poisonous Trio, the informal organiser of months-long protests in the summer and autumn of 2020, is expected also to pass the 4% threshold, gaining 4.2% of the vote. VMRO is on around 4%.

“This is victory for European Bulgaria. The BSP has marginalised itself,” Daniel Smilov, political analyst, commented after the first results were announced.

Taking place amid a severe new wave of coronavirus (COVID-19) the election turnout was low at just 47.8%, Alpha Research said.

According to Genoveva Petrova, political analyst, it will be difficult for any party to form a government in the new parliament.

Analysts say that a coalition between Gerb and BSP seems highly unlikely and either of the main parties would struggle to form a majority by striking a deal with the new opposition parties in the parliament.

“The BSP is losing its central position. The DPS no longer plays the role of the one who is determining the kings behind the curtains. No matter whether we shall overleap DPS, the fact we are so close shows that, being a consistent political force, we can oust them,” Hristo Ivanov, one of Democratic Bulgaria’s leaders, commented to bTV.

He added that the party will not discuss any coalition possibilities until it sees which parties will vote against giving a mandate to Borissov to form a government. According to Ivanov, this election was the beginning of a change, which might take more time.

Gerb, the BSP and the DPS have not yet commented the election outcome.

Trifonov mentioned his silence on Facebook, saying that he has symptoms of coronavirus and has self-isolated. However, Trifonov also noted that the election results showed what “the sovereign looks like”.

Trifonov has clearly stated he will not form a coalition with Gerb, the BSP or the DPS, yet he is still seen as a potential new coalition partner for Borissov as in the past he has spoken very positively about both Borissov and DPS chairman of honour Ahmed Dogan.

On the other hand, in the run-up to the election there were unproven rumours that various businessmen are funding Trifonov in an attempt to replace Borissov, whose charm seems to be exhausted in Bulgaria after dozens of political scandals and three mandates as prime minister.

Maya Manolova commented that Stand up! Thugs out! Will not support any coalition that includes Gerb.

There was a clear divide between voting in Sofia and other major cities, as well as the diaspora, where people flocked to the new opposition parties, and smaller towns and rural areas where they continued to favour the established parties.

There were numerous posts from Bulgarians abroad saying they had to wait for hours to vote and long queues were formed, especially in the UK and in Berlin. Most of their votes are expected to go to the opposition parties and could eventually lower the shares gained by Gerb, the BSP and the DPS.

Lubomir Alamanov, a prominent Bulgarian PR expert, said the differences between the results in the capital Sofia and a few other bigger cities, where Democratic Bulgaria is expected to lead, and the rest of the country, where Gerb, the BSP and the DPS have higher support, shows the deep division between them.

“This is a sad, feudal, captured Bulgaria where institutions are only instruments in the hands of the local gauleiter,” Alamanov wrote on Facebook.

“After nearly 10 years I have forgotten what it is like to be represented in the power. Friends, we have succeeded. Gerb will not rule,” Silvia Radoslavova, a Sofia-based event organiser, said, hailing the result.

Alamanov, meanwhile, noted that the BSP’s failure to capitalise the dissatisfaction accumulated towards Gerb is “the only case in the history of Universe when those in power are in a serious pandemic, economic and political crisis and the image of the opposition is falling faster than that of the ruling party”. Alamanov blamed the BSP’s poor performance on its leader Kornelia Ninova.

“No wonder the voters of the BSP are confused,” Alamanov wrote. “Overall, the voters want change. The current ruling coalition gets just around 30%. Should the turnout goes 50%, only 15% of voters want them. The situation is clear. Overall, voters have re-confirmed our civilisational choice to be part of the western civilisation.”