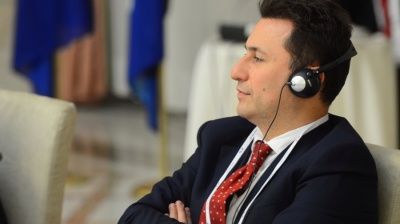 Macedonia ex-Prime Minister Nikola Gruevski said in his first TV appearance following his escape in November that he fled to Hungary after being warned that he would be killed in prison.

Gruevski was sentenced to two years in prison in the Tank case for influencing officials to buy a luxury Mercedes from state funds, causing damage to the budget of €600,000, but disappeared a few days before he was supposed to go to jail. He also faces other trials. He arrived to Budapest via Albania, Montenegro and Serbia.

In an interview with Sitel released on February 2, Gruevski denied that current government officials helped him to flee.

"I went to Albania, and I sought political asylum in the Hungarian Embassy in Tirana. From there I came to Hungary, in a way that was decided," Gruevski said.

Gruevski said he sought asylum due to political persecution in the country.

The Hungarian authorities decided to escort him to Budapest for security reasons, since he was a former prime minister.

“After I left Albania I used my ID card, how I entered Albania I won’t tell you and will leave the government to find out,” Gruevski said. He entered Hungary with a document issued by the embassy in Tirana.

His passport was seized during the investigation and it is unknown how Gruevski crossed the border with Albania. Macedonian citizens can travel to Montenegro and Serbia only using ID cards.

Further on he revealed that initially he planned to serve his prison term, despite the “crazy verdict without legal basis,” but then well informed sources allegedly informed him that a plot against him was planned in the jail.

“Then I changed my decision," Gruevski said without revealing any names because, as he said, he cannot prove the plot at the moment.

The fugitive revealed his whereabouts for the first time on November 13 on his Facebook account where he said he was in Budapest. Police issued an arrest warrant for Gruevski on November 12 after court couriers were unable to find him at home, but the international warrant was only issued after his November 13 post.

Under the EU-mediated Przino Agrement Gruevski agreed to resign and left his post in January 2016. This took place following the wiretapping scandal in 2015 when former opposition leader and now PM Zoran Zaev released wiretapped conversations which revealed corruption among top officials including Gruevski and former ministers.