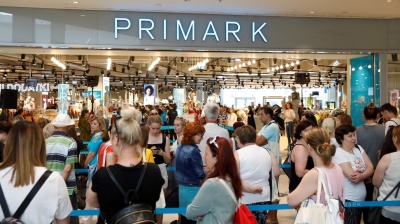 Thousands of shoppers queued to enter fast fashion giant Primark’s first store in Slovenia, which opened on June 13 in the Citypark mall in the capital Ljubljana.

The opening in Ljubljana marks the long-awaited entry of Primark, whose fast fashion designer inspired clothes earned it the name "Primarni", to the Central and Eastern European (CEE) market.

It reported “thousands of enthusiastic customers” turning up for the opening of the Ireland-based retailer, and forecast that “Primark will enable Citypark to further bolster the city of Ljubljana as a shopping destination.”

"The launch of Primark at CITYPARK Ljubljana has once again allowed us to introduce one of the world's most successful textile retailers to the country. When the first Primark opened in Austria at SILLPARK Innsbruck in 2012, we recognised the power of the brand's magnetism on fashion enthusiasts as well as its tremendous appeal" said SES CEO Marcus Wild in a statement.

The Ljubljana store brings the total number of Primark stores to 372 in 12 countries, most of them in western Europe.

However, the fast fashion retailer plans further eastward expansion, having announced plans for further expansion in Poland and the Czech Republic.

By entering the Slovenian market, Primark follows fellow international fast fashion giants H&M and Zara into the eastern part of the continent, as they have shifted their focus from developed to emerging markets over the last decade, analysis by bne IntelliNews showed.

This trend is expected to continue. “West European markets becoming quite saturated, with the largest fast fashion retailers … showing slow growth or even decline. Naturally these companies are looking to expand to emerging economies in Eastern Europe, Asia or Latin America where their presence is smaller and they can expand and show faster growth rates,” Euromonitor International’s research manager for beauty and personal care, Mantas Kaluina, told bne IntelliNews in a 2018 interview.

Consultancy McKinsey calls 2017 the end of an era, after which “the West will no longer be the global stronghold for fashion sales”. From now on, it anticipates, more than half of apparel and footwear sales will take place outside Europe and North America, as the spending power of the growing middle classes in emerging markets increases.

Slovenia’s retail trade increases in May after three-month decline