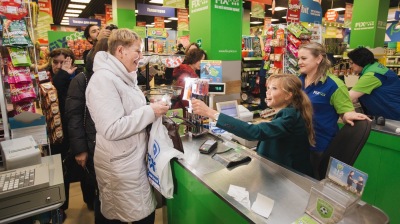 Russian discounter Fix Price reported that like-for-like (LFL) sales jumped 20.6% in the third quarter of this year, making its 15th quarter in a row of double digit growth driven by bargain-hunting consumers
By bne IntelliNews October 12, 2020

Brick-and-mortar retailers around the world are feeling the pain, as enforced quarantine measures and declining disposable incomes are eating into foot traffic, putting pressure on the bottom line. The downturn isn’t uniform, however, as stores operating in the value segment – the likes of discounters Five Below and Dollar Tree – have seen sales boosted by bargain-hunting consumers.

Similar trends are playing out in emerging markets like Russia. Fix Price, the country’s largest discounter by turnover, selling non-food and a small selection of food items, reported on October 12 its like-for-like (LFL) sales jumped 20.6% in the third quarter, the company’s fifteenth consecutive quarter of double-digit growth.

“In the quarantine environment we were able to quickly adapt to the new conditions. We introduced a new range of high-demand products, secured uninterrupted supplies of goods, and most importantly ensured the safety of our customers and employees,’’ Fix Price CEO Dmitry Kirsanov said in a company statement. “In the third quarter of 2020 we continued to see additional support for the variety value retail segment on the back of growing price awareness among customers and higher demand and consumption of goods at more affordable prices.’’

Russian real wages have been hit by the coronacrisis. After contracting for six years in a row they had begun to grow again in the last quarter of 2019 as spending on the 12 national projects began to trickle down into the economy, but contracted against by the end of the first quarter of this year after the economy was hit by the double whammy of a collapse in oil prices and the start of the coronavirus (COVID-19) pandemic. However, real wages unexpectedly increased +2.3% y/y in July against the +0.1% y/y Bloomberg consensus estimate and analysts say as uncertainty abates, consumer demand is likely to gather strength in the rest of this year.

The increase in the average like-for-like ticket enabled the Fix Price  to offset a drop in social mobility that was caused by lockdown measures.

Founded in 2007, Fix Price Group has over 3,900 stores in more than 1,000 locations in Russia and neighbouring countries.

The retailer has continued to expand its store network in Russia, Belarus and Kazakhstan, and have recently opened its first stores in Uzbekistan, according to Kirsanov.