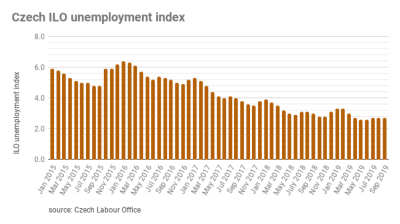 Czech unemployment remained at 2.7% for the third consecutive month in September and can't fall any further says Labour Office
By bne IntelliNews October 10, 2019

Czech unemployment remained at 2.7% for the third consecutive month in September, data from the Labour Office of the Czech Republic released on October 8 shows .

According to the analysts, there is no more room for unemployment to decrease further. Czechia has reached full employment and the Labour Office is expecting the rate to grow slightly by the end of the year.

“Unemployment stagnated in September, but the absolute numbers of job seekers dropped. During the previous month, more than 50,000 people left the Labour Office register, which is more than the number of newly registered,” said the Director General of the Labour Office of the Czech Republic Katerina Sadilkova.

The number of unemployed people fell to 201,900 in September, the lowest September value since 1996. The number of vacancies decreased with employers offering 345,354 jobs. This year's average unemployment rate is expected to stand at 2.8%.

“The companies have fully started their activities and are hiring new employees. Their interest is focused primarily on technical professions not only in blue-collar jobs, but also in higher-level positions,” Sadilkova added. Seasonal work continues and the tourist season is over.

According to the analysts, unemployment has almost nowhere to fall. It might see a slight further drop in October, due to a new wave of graduates looking for a job, however, by the end of the year the rate will increase. Despite that, the unemployment rate is still expected to remain the lowest in the European Union.

“Not only is unemployment no longer falling visibly, as was the case in September, but the growth in job vacancies has also stopped. This is nothing new, because the number of vacancies (after seasonal adjustment) has been basically stagnating for the fourth month in a row,” CSOB Petr Dufek, the Czech News Agency cited.

As the Komercni Banka analyst Jana Steckerova put it, the slowdown of the domestic economy is not yet visible in the labour market. It starts to show up in industry. The unemployment in industry has been falling steadily since the beginning of the year. “In our opinion, the development on the industrial market predicts further development on the Czech labour market. This year, the share of unemployed people is expected to reach an average of 2.8%,” she said, adding that next year the rate will increase to 3.1%.