Czech unemployment rate is the lowest in the EU in 2018 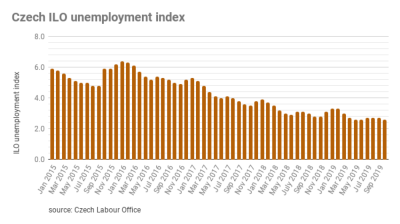 The Czech Republic recorded the lowest unemployment rate in the European Union in 2018, for the third consecutive year, at 2.2%, followed by Germany with 3.4% rate, according to data published by the Czech Statistics Office in the Statistical Yearbook 2019 on November 25.

The Czech Republic reported the lowest unemployment rate also compared to the countries outside the EU, such as Japan (2.4%) and Iceland (2.7%).

In October, Czech unemployment fell to its lowest since 1996, reaching 2.6%, down from 2.7% for the previous three consecutive months. The analysts linked the decline in unemployment to seasonal effects. According to them, it reached its bottom this year. Next year they expect unemployment rate to increase as the economy slows down.

As the office reported, the Czech economy grew faster than the EU and Eurozone average, up at 3% in 2018. In 3Q19,  the Czech economic growth has slowed to 2.5% year-on-year and 0.3% quarter-on-quarter, most likely driven by household consumption, according to the Czech Statistics Office.

“Workers will still benefit from high wage growth, while unemployment will remain low. However, the external sector will limit growth as economic activity in the main trading partners is slowing, which will also lead to declining investment growth,” the report read.

Albania’s exports fell by 9.0% in 2020, with the biggest negative contribution coming from the textiles and footwear sector.