Czech household confidence down for third consecutive month, at its lowest level since 2016 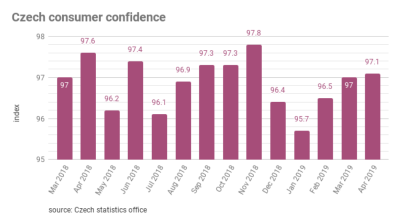 Confidence in Czech economy increased very slightly by 0.1 point month-on-month in April to 97.1 from 97.0 in March
By bne IntelliNews April 25, 2019

Confidence in Czech economy increased very slightly by 0.1 point month-on-month in April to 97.1 from 97.0 in March, with households being more worried about their future financial situation for the third consecutive month and entrepreneurs with slightly better confidence in industry, according to report by the Czech Statistics Office published on April 24. Household confidence has gradually reached its lowest level this year since mid-2016.

“Companies are significantly limited by the lack of employees. A large proportion of respondents also state insufficient demand as a barrier to growth,” said Head of Business Cycle Survey of the Office Jiri Obst, Czech Television reported.

In April, production capacity utilization in manufacturing industry stayed at the same value 85.7 % quarter-on-quarter. Respondents estimate they have work secured by contracts for 8.2 months. “This year, companies are planning to invest more than last year, especially in renewal of production equipment and extension of production capacities,” Obst added. The level of investment should increase by about 12% in 2019.

In construction, confidence went down by 2.0 points to 105.9. The assessment of current economic situation of the respondents dropped and the assessment of total demand for construction work decreased slightly m/m in April. Most important barrier of production is considered by 34% to be also a lack of employees. Respondents expect for the next quarter no changes in the development of construction activity and almost no changes in the employment.

According to ING Chief Economist Jakub Seidler, growth in confidence in industry is slightly surprising given the development of similar indicators abroad. “Domestic industrial confidence growth was driven mainly by the more volatile component of expectations for the next three months, which improved in April after the previous three weak. On the other hand, the assessment of current demand in industry declined in April further to its lowest level since early 2014,” said Seidler, adding that in this respect, the message of higher April confidence in industry is providing less clear evidence. As such, recent confidence data are not bringing a clear signal for the forthcoming Czech National Bank meeting, which seems to be 50:50 call right now.