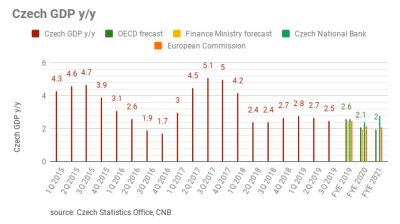 Czech annual economic growth slowed to 2.5% year-on-year in 3Q19, up by 0.4% quarter-on-quarter, driven by both the domestic and external demand, down from a y/y growth of 2.7% in 2Q19, according to the refined estimate of the Czech Statistics Office (CSO) published on November 29.

Both domestic and external demand “contributed equally by one percentage point to growth. A 0.3% decrease was recorded for investment. In terms of industries, services were the main contributor to the growth,” said CSO Director of the National Accounts Department Vladimír Kermiet.

“The latest figures confirm that the Czech economy has entered a phase of slowdown, which is most likely to continue. It is likely that investment activity will continue to ease, while the contribution of industry will continue to decline on the supply side,” predicted CSOB bank Economist Petr Dufek, the Slovak News Agency cited.

The Gross Value Added (GVA) rose by 0.3% q/q, mostly in information and communication, up by 1.9%, professional and administrative activities by 0.9% and real estate by 0.9%. A slight decrease we recorded in industry. In annual terms, GVA increased by 2.4%.

The external trade balance at current prices went up by CZK17.8bn (€694.7mn) y/y in the 3Q19, with exports of goods and services decreasing in real terms by 0.4% y/y. In the y/y comparison it accelerated by 1.8%, positively influenced by export of transport equipment.

Imports of goods and services grew by 0.4% q/q and by 1.0% y/y, mostly due to growth in trade in machinery and sub-deliveries for the automotive industry.

“It can be said that the growth of the Czech economy is slowing down, but it is still a solid growth,” said Chief Economist of Generali Investments CEE Radomír Jac, adding that current performance does not fulfil any catastrophic scenario related to the slowdown in global economic growth or developments in Germany.

“For the whole year, Czech economic growth should be around 2.5% after 3% in 2018. Although foreign risks seems to have moderated in recent weeks, they're still elevated,” said ING Chief Economist Jakub Seidler, adding that the positive news is that the German economy avoided a technical recession in the 3Q19, with a modest y/y growth of 0.1%, while the market expected a slightly negative figure.

According to NN Investment Partners portfolio manager Michal Spacek, despite pessimistic expectations, a solid growth is thus positive news. He expects the Czech economy to grow by 2.5% this year.

“Yes, [economic] cooling is coming. It builds on the one that is ahead of us, especially in Germany. But so far, according to all indications, this is not the beginning of a major recession, no Armageddon,” said the Czech National Governor Jiri Rusnok in an interview for daily Novinky.cz.

“From our perspective, next year will reach kind of bottom and then we get back to higher numbers. So we're optimistic,” Rusnok added.

Central bank seen as set to opt for more easing but all eyes are on floundering lira. If it falls much further it could limit room for policy support.

The IHS Markit Russia Services Purchasing Index (PMI) index crashed to a new all-time low as the double whammy of an oil price collapse and the stop-shock caused by the coronavirus pandemic hit the services industry.

The coronavirus pandemic drove the decline of the indicator, which is likely the first in a series of steeply deteriorated macroeconomic readings to come out this month.

Oxford University researchers look at the steps taken to contain the spread of COVID-19.

Ukraine’s Economy Ministry has dramatically downgraded its 2020 macroeconomic forecast and predicts a 3.9% y/y contraction in the economy in 2020, down from its previous prediction of 3.7% y/y growth at the start of the month.

Oil price crash takes 0.5pp off Turkey’s inflation rate
1 day ago
Russia Services PMI index crashes to a new all-time low of 37.1 in March
3 days ago
Poland’s PMI the first indicator pummelled by COVID-19
4 days ago
Balkans have some of the world’s strictest anti-coronavirus measures
6 days ago
Ukraine's Economics Ministry forecasts 3.9% economic contraction in 2020
7 days ago