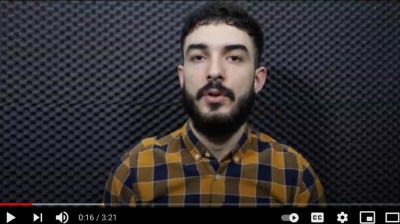 A screen shot of Mahammad Mirzali speaking on a January 31, 2021 episode of his YouTube video blog, Made in Azerbaijan.
By bne IntelIiNews March 17, 2021

French authorities should thoroughly investigate a brutal knife attack on exiled Azerbaijani video blogger Mahammad Mirzali, find the perpetrators, and ensure that they are held to account, the New York-based Committee to Protect Journalists said on March 16.

On March 14, Mirzali, who runs the Made in Azerbaijan YouTube video blog, was walking in downtown Nantes, the city in western France where he lives in exile, when six men approached him and started punching him and stabbing him with knives in his arms, hands, legs, neck, and face, according to news reports in Caucasus and Azerbaijan-focused outlets. The reports, added the CPJ, also said that the attackers attempted to cut out his tongue. Regional French news outlet Ouest France reported on the incident without naming Mirzali.

Afgan Mukhtarli, an Azerbaijani journalist in exile in Germany and a friend of the blogger who spoke with CPJ via phone. CPJ said he confirmed the details of the attack. According to the watchdog, Mukhtarli said he was able to talk to Mirzali on the phone from the hospital, and that the journalist suffered 16 to 17 knife wounds and was in a critical condition. CPJ said it was unable to determine the blogger’s current health status.

“French authorities should swiftly investigate the knife attack on exiled Azerbaijani blogger Mahammad Mirzali, find the perpetrators and those who ordered it, and bring them to justice,” said Gulnoza Said, CPJ’s Europe and Central Asia programme coordinator. “French authorities must ensure that Mirzali and other exiled bloggers and journalists can exercise their right of free expression without having to fear for their lives.”

Mukhtarli was also quoted as saying Mirzali called the police when he saw the men approaching him, adding that they attacked the blogger until a group of passersby intervened and that by the time police arrived the attackers had already escaped.

French police have opened an investigation into the incident, reports said.

Mukhtarli was cited as saying that he believed the attack was an attempt to silence the blogger, whose YouTube channel counts some 265,000 subscribers, and covers topics such as the alleged persecution of opposition bloggers, journalists, and activists by Azerbaijan President Ilham Aliyev, corruption, and other topics. Mukhtarli told the CPJ that Mirzali began the channel in exile; he fled Azerbaijan in 2016 to escape state persecution for his political activism with the opposition party Popular Front of Azerbaijan, according to a report by Meydan.TV, an independent Germany-based news outlet that covers Azerbaijan.

Mukhtarli told CPJ that Mirzali was no longer affiliated with the party, but his video blog is oppositional in nature.

The attack, according to the CPJ, followed several other incidents involving the blogger and his family. Earlier this year, it said, an anonymous person tried to blackmail Mirzali via WhatsApp, threatening to publish intimate photos of the blogger’s sister and her husband if he didn’t stop his blogging. The episode was the subject of a report by the independent Caucasus-focused news website Jam News, a post on Mirzali’s Twitter account, and Mukhtarli. After Mirzali refused to comply, the videos were made public, according to a report by Azerbaijan Internet Watch, an online platform tracking internet censorship and surveillance in Azerbaijan.

In October 2020, unknown people shot at Mirzali in Nantes, and he received a surface wound in his arm, according to a report by Caucasus-focused outlet Kavkazsky Uzel and Mukhtarli.

In January 2018, authorities in Azerbaijan arrested Mirzali’s father Fazil Mirzaliyev and his brother-in-law Elman Agayev, according to news reports and a report by the Institute for Reporters’ Freedom and Safety (IRFS), a local Azerbaijani nongovernmental organization. During the arrest, law enforcement officers told the two men to make Mirzali stop his critical blogging, according to those reports. Mirzali’s father was released after one day and his brother-in-law was released after six, reports said.

CPJ said it sent a request for comment to the French Ministry of Interior via its official webpage and to the Azerbaijani Ministry of Internal Affairs via email but did not receive any responses.

Japan is extending an emergency aid grant totalling $4.8mn to Armenia and Azerbaijan to help the two countries deal with the humanitarian crisis created by last autumn’s six-week conflict over the ... more

Yerevan believes that given the changes in the Nagorno-Karabakh status quo, Ankara no longer has any reason to keep its border with Armenia closed, Armenian Foreign Minister Ara Ayvazyan was quoted ... more

Azerbaijan will build a 100kW floating solar power plant on Boyukshor Lake near Baku, the country’s energy ministry has announced. Gamma Solutions has been selected via a tender for the ... more