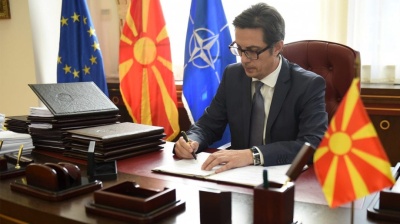 President Stevo Pendarovski signed the laws immediately after the vote.
By Valentina Dimitrievska in Skopje April 18, 2021

North Macedonia’s parliament adopted the fifth anti-crisis economic package on April 18, with two MPs brought in to vote in protective gowns as they had tested positive to COVID-19.

The adoption of the laws was delayed for two months due to the lack of quorum, leaving thousands of employees from firms affected by the coronavirus crisis without salaries.

The work of the parliament was blocked by the opposition parties, mainly by the conservative VMRO-DPMNE. Despite the recent agreement between PM Zoran Zaev and opposition leader Hristijan Mickoski, aimed at unblocking the work of the assembly, VMRO-DPMNE continued to blackmail the majority and failed to provide a quorum for the work of the Parliament to continue.

The infected MPs voted in protective gowns in isolated booths in the parliament.

Following the vote, PM Zoran Zaev congratulated the parliament on the adoption of the fifth economic package.

“Congratulations to the MPs from the parliamentary majority who dealt with all blockades and found a way for these important laws for citizens to be finally adopted,” Zaev said in a Facebook post.

“Without any dilemma, I signed the decrees that enable the implementation of the fifth economic package with which over 60,000 our citizens will receive salaries for February and March,” Pendarovski said in a Facebook post.

The parliamentary group of the opposition VMRO-DPMNE accused the ruling Social Democrats of endangering the health of MPs by bringing in two infected lawmakers into the parliament to vote and announced it will file criminal charges against all those who allowed voting to take place in such conditions.

Previously, VMRO-DPMNE also rejected appeals by the majority for distance voting in the parliament.

Financial support will be provided for companies in order to preserve jobs in tourism, crafts, catering, transport and the events industry, to maintain the liquidity of the private sector, create a more favorable business environment and support citizens.

The fifth set contains 29 measures, worth MKD9.7bn or about €160mn, of which MKD91.7mn will be direct budget costs.

The total value of the previous four anti-crisis packages amounted to €860mn and their implementation reached 82%.