Coronavirus death toll in Iran's Qom rises to 50, more than 250 in quarantine 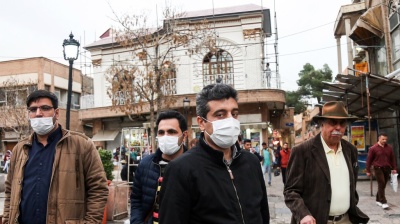 Iran in state of panic as reported number of dead from Coronavirus hits 50.
By bne IntellIiNews February 24, 2020

Some 50 people have died from the Coronavirus infection in the Iranian city of Qom, some 140km south of Tehran, ILNA reported following comments from an MP on February 24, as experts fear Iran has become the new epicentre for the virus outside of China.

By February 25, the official death toll in Iran has now reached 15, while some 95 people have been confirmed to have coronavirus. Regions as far south as the island of Qeshm, Shiraz and Mashhad have now reported new infections. Regional countries are also now banning interconnecting flights, including a ban on flights from the United Arab Emirates by Bahraini authorities across the Persian Gulf.

Earlier in the day, Ahmad Amirabadi Farahani, MP for Qom in the country’s newly assembled Parliament, said that some 50 people had died in his city alone as fears of pandemic rise. His comments were immediately denied by the Health Ministry, which said only 12 had died. Amirabadi hit back and criticised the ministry saying he had an entire list of the names of those who died in the city.

As bne IntelliNews reported last week, fear spread across Iran, Iraq and Armenia after residents of Qom were infected with the deadly virus and the first mortalities were reported.  Qom is the seat of Shi’ite Islamic learning in Iran and home to about 1.2mn residents.

Amirabadi added that another 250 people were infected with the deadly virus, and are in quarantine in the city, which has become the new springboard for infections in countries as far away as Canada and Lebanon.

He said the 50 deaths date as far back as February 13. The Islamic Republic, however, first officially reported cases of the virus and its first deaths on February 19.

Speaking with ILNA he said the situation in the city is “not good” adding that the “performance of the administration had been poor.” “None of the nurses has access to proper protective gears,” Farahani said, adding that some health care specialists had left the city. “So far, I have not seen any particular action to confront corona by the administration.”

It was reported Amirabadi immediately left the chamber after "feeling unwell", his chair and places where he had stood were immediately disinfected by panicked parliament workers.

Iran is now reporting cases in several provinces across the country, with several people saying the medical system is failing to cope with hordes of people coming into accident and emergency demanding masks and tests to see whether they are carrying coronavirus.

Flights out of Iran have been grounded, with several neighbours closing their borders and airports to planes arriving from the country. Schools, universities and public buildings remained closed on February 24 as the country struggled to deal with the growing public emergency.

Following those returning to neighbouring countries all of Iran’s neighbours and allies reported infections. Kuwait reported two of those, which had returned from the eastern city of Mashhad, had tested positive for coronavirus.
“I just hope the Foreign Office doesn’t forget us,” one British national working in the city told bne IntelliNews, adding “I had a ticket to fly out on Thursday with Turkish Airlines…I think that was cancelled.”

The damage being caused to the Islamic Republic’s economy is still unknown. Following the outbreak, Iran’s weakened economy has taken another massive hit from the panic on the streets, with the euro now trading above IRR170,000 to one euro, the British pound sterling continues to trade above IRR200,000 – both record highs for 2020.

WHO says world on edge of a pandemic

All countries now must prepare for a potential coronavirus pandemic, the head of the World Health Organisation (WHO) Tedros Ghebreyesus warned as several outbreaks occur simultaneously.

Ghebreyesus said the spread of the virus is not yet at pandemic phase but conceded it has the capability to become one.

He added the focus must be on still containing the growing number of outbreaks, now spreading in at least three dozen countries.

“The sudden increases of cases in Italy, the Islamic Republic of Iran and the Republic of Korea are deeply concerning,” Ghebreyesus said.

“There’s a lot of speculation about whether these increases mean that this epidemic has now become a pandemic.

“WHO has already declared a public health emergency of international concern – our highest level of alarm – when there were less than 100 cases outside China, and eight cases of human-to-human transmission.

“Our decision about whether to use the word ‘pandemic’ to describe an epidemic is based on an ongoing assessment of the geographical spread of the virus, the severity of the disease it causes and the impact it has on the whole of society.

He added the global community must now focus on containment while doing everything it can “to prepare for a potential pandemic.”

ING: How a post-Covid world could look
Prices for ginger and lemons soar as Russians turn to traditional home remedies to fight coronavirus
OUTLOOK 2020/2021 Iran