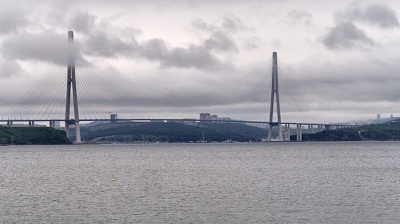 The bridge to Russky Island near Vladivostock, one of the two offshore zones established in Russia last August.
By Polina Lyadnova and Matthew Fisher of Cleary Gottlieb May 20, 2019

The first birthday of Russian offshore is fast approaching. However, the two offshore zones established in Russia last August for the purposes of tempting foreign-based Russian businesses back to the Motherland have yet to catch on. Indeed, few companies have moved (or ‘redomiciled’) their legal home to either of these ‘Special Administrative Areas’ so far – reportedly just three in the eight months following enactment of the offshore law.

While certain legal and practical difficulties explain the limited appeal of such a move to many Russian businesses registered abroad, the potential advantages of being resident in a Special Administrative Area could yet see a handful of companies go through with redomiciliation. Most notably, the industrial giants Rusal and En+ have announced plans to redomicile their respective parent companies from Jersey to one of the Special Administrative Areas.

The 90s: Russian companies ‘escape to the sun’

The corruption, underdeveloped corporate law and ineffective enforcement mechanisms that marred the early days of Russian capitalism prompted many businesses to establish their legal homes outside Russia. They typically moved to offshore jurisdictions, which offered robust protection of property rights under an established body of law and practice overseen by an independent and experienced judiciary.

While the problems that drove Russian businesses abroad have become less acute over time, the foreign jurisdictions of choice for Russian businesses continue to offer more-established pathways to the international capital markets and, in most cases, a low- or zero-tax environment. Accordingly, even now, more than one in four of Russia’s top businesses (excluding state-owned entities) have their parent company incorporated in a foreign jurisdiction – foremost Cyprus and Jersey. 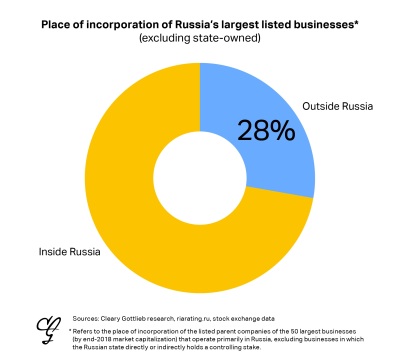 In an effort to increase its tax take, the Russian government has since 2014 sought to bring foreign-incorporated Russian businesses back to mainland Russia via a process dubbed ‘de-offshorisation’. In summer 2018, however, the government changed tack by passing laws 290-FZ and 291-FZ, which enable such businesses to move their legal home to two newly established offshore jurisdictions on Russian territory – the Special Administrative Areas of Oktyabrsky Island (in Kaliningrad’s Pregolya river) and Russky Island (off the coast of Vladivostok).

This is the redomiciliation procedure that Rusal, En+ and a number of others are planning to follow. It is distinct from dissolving the company and setting up a new company in a Special Administrative Area since the company at no point ceases to exist and its existing contractual rights and obligations remain intact throughout the procedure. In addition, while the redomiciled company will by default become subject to Russian corporate law, insolvency law and capital markets rules, it may until 2029 opt to continue to apply many of the laws of its original jurisdiction (including those governing foreign securities listings and relations between shareholders).

On paper, redomiciliation is straightforward. After resolving to redomicile, a non-Russian commercial company may submit registration papers to one of the Special Administrative Areas if it satisfies three conditions. The company must have carried out activities in Russia and elsewhere since January 2018, be incorporated in a jurisdiction subject to certain international anti-money-laundering standards, and commit to invest RUB50mn (about $780,000) in Russia within six months. With all the conditions met, the company will be registered in the relevant Special Administrative Area within five business days and be required to have itself removed from the register in its original jurisdiction.

In practice, things are not quite so easy.

Furthermore, redomiciliation may risk the company having to pay its debts early. To protect creditors, financing agreements allow creditors to demand that the borrower immediately repay its debt if certain events occur. Russian law contains provisions intended to ensure redomiciliation does not constitute such an event. However, these provisions of Russian law are not applicable to the international financing arrangements used by most major companies, which are typically governed by English or other foreign law. To complicate matters, creditor-protection provisions rarely use the term “redomiciliation”, which creates further ambiguity as to whether they are triggered by redomiciliation. To avoid triggering repayment events, therefore, the company must analyse all its foreign-law financings at length and, where necessary, determine whether creditors will waive their protections. This may be particularly problematic in the case of bonds, where the identity of the bondholders may not be known to the company.

There is also a danger that the company may end up subject to two jurisdictions simultaneously. Registration in a Special Administrative Area does not automatically result in de-registration in the original jurisdiction. Therefore, until the company is removed from the register in its original jurisdiction, it will exist both there and in Russia, and be subject to the laws of both jurisdictions. Unless the company takes steps to prevent such overlap, it may well find itself in a position where complying with the law in one jurisdiction breaches the law of the other (among other legal quagmires). In fact, the very first company to redomicile is reportedly already embroiled in a jurisdictional dispute.

There are, however, reasons to think that there will at least be a trickle of companies seeking redomiciliation.

For one thing, redomiciliation is consistent with the russification of high-level business in Russia. As the business infrastructure in Russia becomes more sophisticated and political risks continue to mount abroad, Russian businesses are increasingly avoiding exposure to foreign jurisdictions. For example, in the three years prior to 2014, well over half of equity offerings by Russian businesses were listed on foreign exchanges, whereas since 2014, such foreign listings have become a rarity and foreign exchanges have seen a spate of Russian businesses delist. Redomiciliation appears to fall squarely within this broader introspective trend.

In addition, redomiciled companies may achieve a number of benefits by being based in Russia. They are likely to get better access to state support and procurement tenders, and, by relocating the company to the country where most of its assets, operations and management are based, they will surely achieve a degree of administrative and legal simplification. Importantly, redomiciled companies will not benefit from sanctions protection: most sanctions work by restricting customers, suppliers and financiers in the sanctioning country from dealing with a target, regardless of whether that target is legally based in the sanctioning country, Russia or elsewhere.

Last but not least, companies registered in a Special Administrative Area are exempt from some of the obligations on companies based in mainland Russia. For example, Russian residents are typically required to comply with currency controls that subject non-rouble transactions to restrictions and various procedural formalities. As non-residents, redomiciled companies are not required to apply such currency controls when they transact with other non-residents. Redomiciled companies may also be eligible for tax relief if they are ‘international holding companies’ (broadly, companies whose major shareholders have not changed since 2017). Subject to various conditions, such companies enjoy 0% taxation on certain capital gains and dividends received and, in the case of listed international holding companies, 5% taxation on dividends paid to foreign shareholders until 2029, among other tax reliefs.

Despite the factors militating in favour of setting up shop in a Special Administrative Area, the challenges are significant and likely to convince most Russian businesses based abroad that it would be best to stay put. However, for the small number of businesses willing to invest the time and resources needed to navigate the pitfalls, redomiciliation may yet prove an attractive prospect.

Polina Lyadnova and Matthew Fisher are lawyers at Cleary Gottlieb in London. Their practices focus on advising Russian and CIS clients such as Rusal on high-value financial transactions.

Polina Lyadnova may be contacted via email or LinkedIn; Matthew Fisher via email, LinkedIn or Twitter.

This article represents the views of the authors only and is not legal or financial advice.