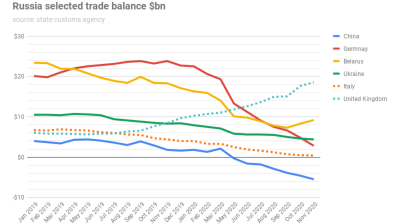 The trade balance between Russia and China remains well balanced with $48.1bn of Russian exports to China in November, which is only slightly down from the $49.8bn in October and September and $50bn to $53bn per month in the second quarter. / bne IntelliNews
By bne IntelliNews January 3, 2021

China remains top dog as Russia’s biggest trade partner and is on course to maintain the $100bn trade turnover of recent years, but aspires to double their mutual trade to $200bn in the coming years.

Overall, Russia’s trade is down significantly in 2020, with the current account surplus halved from the $75bn earned in 2019 to an estimated $35bn surplus expected for the full year in 2020, but Russia Inc. will stay in profit in 2020.

The trade balance between Russia and China remains well balanced with $48.1bn of Russian exports to China in November, which is only slightly down from the $49.8bn in October and September and $50bn to $53bn per month in the second quarter.

Imports from China to Russia have followed a similar pattern, with $53.6 worth of imports arriving in November against the almost identical volumes each month between May and October. In the first quarter Russia imported circa $58bn a month.

However, the global crisis has reduced trade between the two by more than $10bn per month from the circa $60bn a month Russia was exporting to China in the first quarter, and as a result the modest trade surplus Russia was running with China in 2019 of about $4bn per month went negative in May and the deficit increased to a significant $5.5bn in the month of November.

The next largest trade partner, according to the official statistics, is the Netherlands with exports to Russia running at about $25bn per month, although this figure has fallen consistently every month since the $47.6bn it exported to Russia in January of this year. This trade is of course largely Russian companies routing trade back home via the Netherlands, where many Russian companies are domiciled.

The role of the Netherlands as a convenient tax haven may change in 2021 as the Kremlin, in its hunt for more tax revenues, is seeking to bring more Russian companies onshore and is threatening to end the double tax treaty arrangement that encouraged so many Russian firms to incorporate there (see story in public finance section). Cyprus has already succumbed to an increase in the duty rates demanded by the Kremlin, but Cyprus is much more heavily dependent on Russian business than the Netherlands, where talks are ongoing, so the outcome of this negotiation is uncertain still.

Russia’s second most important partner for imports is Germany, where Russian firms largely buy machinery, and the level of imports has been fairly steady at circa $25bn-$27bn all year but dropped slightly to $23bn-$24bn starting in May when the crisis began.

Germany is also an important export market but like the trade with China, exports have fallen by about $14bn per month from the $36.6bn Russia exported to Germany in January 2019 to $22bn in November 2020. As a result, the trade surplus of $20bn per month at the start of 2019 Russia enjoyed with Germany has plummeted heavily to only $2.8bn in the month of November.

Notably Belarus remains an important export market for Russia, with $15.8bn of exports in November making it the fifth-biggest export destination in that month and for most of the year. Exports to Belarus started the year at circa $20bn per month in January and remained at the same volume until May, when they fell to $17bn before contracting to $16bn in August during the start of the mass protests following the disputed August 9 presidential elections, before sliding slightly again to reach $15.5bn in November.

The trade surplus Russia enjoyed with Belarus has also shrunk heavily over the last two years and was already decreasing before the political crisis there started in August. The surplus fell from $23.4bn in January 2019 to $9.2bn in November 2020.

Belarus ran a significant trade deficit with Russia of about $4bn a month in the second half of 2020, down from the circa $10bn deficit Belarus was running at the start of 2020. Russia imported $13.4bn of goods from Belarus in January 2020 and maintained the same volume until May, when imports to Russia from Belarus dropped to $11.7bn in May, a level they have stayed at for the rest of the year.

The other notable trade partner is Ukraine, where, unsurprisingly, the trade turnover has collapsed by three quarters in the last year. Russia exported $15.8bn worth of goods and services to Ukraine in January 2019, which fell to $7.3bn in January 2020 before plunging again to $4.3bn in November.

The upshot is the trade deficit that Ukraine runs with Russia has been more than halved from $10bn per month in January 2019 to $4.4bn in November 2020.

The roughly $2bn of exports per month Ukraine has lost after the restrictions on trade placed on Russian goods have been made up by a rapidly diversifying set of new trade relations the country has built up over the last six years, with a growing trade relationship with China being the most important. The lost $6bn of imports per month from Russia have for the most part been replaced with imports from the EU.

Exports by Russia to the UK were running at a steady $10bn a month in 2019 but started to grow at the end of the year to finish at $14bn in December 2019. At the same time, imports from the UK to Russia were running at only $4.2bn in January 2019 and stayed at that at that level all year, leaving Russia with a circa $10bn a month trade surplus.

But in 2020, despite the crisis, exports grew by a quarter, ending at $22bn by November 2020 against the same $3.5bn the UK has been selling to Russia each month for the last two years, which translates into a whopping $18.5bn trade surplus in Russia’s favour.

The increase in exports to the UK is probably due to a combination of agricultural exports growing as Russia pushes its expanding grain export business and is also a function of Brexit as the UK looks for new trade deals.