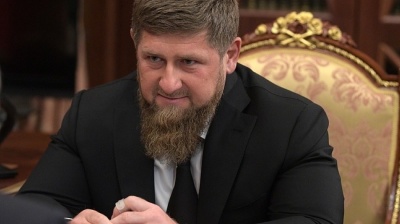 Chechen strongman Kadyrov admitted to hospital with coronavirus
By bne IntelliNews May 22, 2020

The leader of Chechnya and one of the most controversial figures in Russian politics, Ramzan Kadyrov, has reportedly been admitted to “one of the best hospitals in Moscow” after he was believed to be infected with the coronavirus, it was reported on May 21.

The Kremlin-appointed authoritarian leader of Russia's North Caucasus is currently under medical observation while doctors test him for the infection.

The 43-year-old Kadyrov "is suspected of having coronavirus. He's under medical observation," Interfax quoted a medical source in Moscow as saying on May 21.

Kadyrov was taken by plane from his headquarters in Grozny to Moscow, according to Baza, an independent online news agency that broke the story. According to Baza, Kadyrov also infected another passenger on the plane, but the short amount of time that has passed since his journey suggests this latter report is spurious.

Kadyrov was evacuated after he started to show “symptoms of an acute respiratory viral infection,” reports Baza. Doctors have reportedly diagnosed Kadyrov with pneumonia. Officials did not immediately confirm the reports.

Like Russian President Vladimir Putin, Kadyrov visited a Grozny hospital where coronavirus (COVID-19) patients are being treated wearing a Hazimat suit on April 20, where he also participated in collective prayers.

The reports about Kadyrov come as authorities in Chechnya and neighbouring Daghestan have imposed restrictions to deter people from gathering in groups this weekend, as the mostly Muslim-populated regions observe the Eid al-Fitr Islamic holiday, known locally as Uraza Bairam, to mark the end of the month of Ramadan.

Chechen Interior Minister Ruslan Alkhanov said on May 21 that all movements, except for emergency services, will be banned from May 23 to 26 across the republic, adding that a violation of the rule "will be punished in accordance with the law,” reports RFE/RL.

Russia’s infection rate has topped 300,000 people, with more than half fo them in Moscow, making it the second highest infection number in the world after the US with over 1.3mn cases.

While the infections have been concentrated in the Russian capital, which remains the epicentre of the outbreak, the virus has in recent weeks been moving into the regions and running amok in isolated urban settlements, especially in mining communities beyond the Ural mountains. The Russian case tally rose to 317,554 on May 21, while the death toll climbed to 3,009.

While the spread of the virus has clearly peaked after the daily infection rate fell back from 11,000 new cases per day in the last week to circa 9,000 in the last days, Russia is still in the midst of an epidemic.

President Putin addressed the nation in televised remarks to say that the strict nationwide lockdowns will start to be eased in May, but left it to the regional governors to decide on the details.

Moscow Mayor Sergey Sobyanin had already extended Moscow’s lockdown to May 31 before Putin’s comments, and many other governors followed suit.

No protests, but police continue to randomly arrest pedestrians on Belarus Independence Day
4 hours ago
Governor Smolii’s departure from the NBU creates the risk of devaluation of the hyrvnia or default on its debt this year
1 day ago
Croatia heads for hung parliament in July 5 election
1 day ago
Evidence of massive ballot stuffing emerges in Russia's referendum on constitutional changes
1 day ago
Poland’s coal production falls to all-time low in May
1 day ago