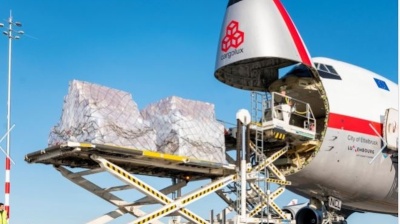 Cargolux will operate direct flight on the Shenzhen-Budapest route once a week.
By Tamas Szilagyi in Budapest September 21, 2020

Cargolux, one of the largest cargo airlines in the world, has launched a direct flight on the Shenzhen-Budapest route. The Boeing 747-400F aircraft landed at Budapest Airport's new logistics base, Cargo City on September 18. The Luxembourg-based cargo airline will operate flights between the two cities once a week.

The new aerial connection is an important milestone, as a significant proportion of the e-commerce goods originating from China arrive in Central and Eastern Europe from the Shenzhen area, the most important financial and logistics centre in Southern China, home to more than 14,000 high-tech companies.

Direct aerial connection not only provides a huge advantage for companies in Hungary and Central and Eastern Europe, but it is also an opportunity for Budapest Airport to play a leading role in the logistics supply of the region, in e-commerce as well, said Budapest Airport CEO Rolf Schnitzler. Budapest Airport looks on air cargo as a key area, which is one of the stable, long-term pillars of its plans, he added.

Budapest Airport handed over its new, 32 600 sqm air cargo handling complex in January constructed from HUF100bn (€277mn) investment. The new facility raised the annual cargo capacity of Budapest Airport by 100,000 tonnes to 250,000 tonnes. Cargo City has been in full swing since then, and as the cargo gateway to Central and Eastern Europe.

Budapest Airport handled 135,500 tonnes of cargo in 2019, up 7.25% from 2018. The airport served as an important strategic hub in the fight against the coronavirus as tens of thousands of tonnes of PPE equipment passed through Cargo City in the spring.