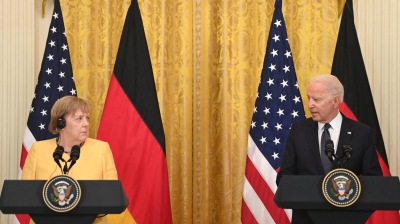 US President Joe Biden and German Chancellor Angela Merkel failed to find a common position on the issue of the Nord Stream 2 gas pipeline that will allow Russia to bypass Ukraine during a meeting of the two leaders on July 15.

Merkel flew to Washington on her last foreign trip as Chancellor to continue discussions on how to deal with the “Russia problem” as Biden continues to thrash out his foreign policy.

The need for the pipeline is the main bone of contention between the US and Germany. Despite Berlin’s support of Ukraine, Germany has allowed the pipeline to be completed that will cut Ukraine out of Russia’s gas business and cost it some $2bn a year in badly needed transit fees. Washington has been trying to block the construction of the pipeline and hopes to boost its sales of LNG to Europe.

Nevertheless, the two leaders vowed to stand together against Moscow’s aggression and promised more sanctions as Russia escalates its aggression against Ukraine. They also promised to present a common front against China.

"I value the friendship," Merkel said of Germany’s relationship with the US in the Oval Office. Biden has gone out of his way to woo Germany after Donald Trump did a lot of damage to transatlantic ties. Merkel is the first European leader to visit Biden at the White House since his inauguration in January.

Biden said he and Merkel were united in their belief that Russia should not use energy as a geopolitical weapon. "Good friends can disagree," he said about the pipeline during a joint news conference. "We stand together and will continue to stand together to defend our eastern-flank allies at Nato against Russian aggression." However, their public comments on the pipeline were vague and non-committal.

Ukrainian President Volodymyr Zelenskiy will have been watching the meeting closely, after he met with Merkel for two days in Berlin earlier this week. Ukraine had been hoping that Germany would take a tougher stance against the construction of Nord Stream 2 and has relied on Washington to bring pressure on Berlin to stop the construction. Those hopes seem to have come to naught.

The two also failed to come to a firm agreement on policy towards China. Biden has made it clear that he sees China’s growing stature as his main foreign policy challenge and intends to counter and contain China’s growing influence in global politics.

Merkel is more ambivalent, as Germany has wooed Beijing, which has become a major trade partner and plays an increasingly important role in the EU thanks to its investments into infrastructure and industry there.

"There is a lot of common understanding that China, in many areas, is our competitor; that trade with China needs to rest on the assumption that we have a level playing field," Merkel said.

Both leaders highlighted China’s poor human rights record and said that they would continue to hold Beijing accountable.

"We are united, united in our commitment to addressing democratic backsliding, corruption, phony populism in the European Union or among candidates for the EU membership, or anywhere we find it in the world," Biden said.