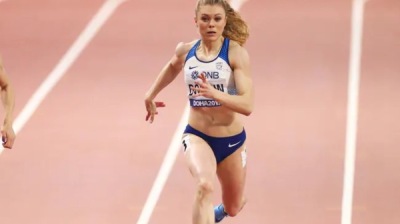 Belarusian Olympic sprinter Kristina Timanovskaya has received a humanitarian visa to enter Poland after she refused to be forcibly returned home to Minsk by government officials after she publically criticised her coaches on social media at the weekend.

The European Union sharply criticised Minsk's attempt to force her onto a plane in the latest scandal caused by Belarus' President Alexander Lukashenko.

"The attempt to forcibly repatriate Krystsina Tsimanouskaya against her own will is another example of the brutality of the repression of [Alyaksandr Lukashenka's] regime that hits all categories of Belarusian society, including athletes, and does not respect any Olympic truce," Nabila Massrali, a spokeswoman for EU foreign policy chief, Josep Borrell, said on August 2 using the Belarusian transliteration of her name.

In comments to Reuters, Massrali went on to express Brussels' "full solidarity" with Timanovskaya and lauded "the fact that she has now been given a humanitarian visa by Poland.”

Timanovskaya was seen entering the Polish Embassy on August 2 after appealing for Japanese and international help to avoid being put on a flight against her will and then spending the night at Tokyo's international airport. She was accompanied to the airport by two members of the Belarusian Olympic committee, but after she was given a ticket and passed security, where her minders could not follow, she went to the Japanese police and asked for aid.

Timanovskaya originally intended to ask for asylum in Austria, according to reports, but according to other reports Vienna was resistant to the idea, as it would threaten business ties between the two countries.

Polish officials said Timanovskaya will be eligible for refugee status once in Poland. The activist group Belarusian Sport Solidarity Foundation (BSSF) has said it has purchased Timanovskaya’s ticket.

Timanovskaya’s husband Arsen Zhdanevich fled to Ukraine as soon as the news broke in order to avoid being taken hostage by the Lukashenko regime. But the family is not out of danger. Reports on August 2 said that police were on the way to Timanovskaya’s parents who live in the countryside. Timanovskaya’s supporters fear that they will be arrested and used to exert pressure on the runner.

The Japanese Foreign Ministry is working with organisers of the Tokyo games as well as the International Olympic Committee (IOC). The Office of the UN High Commissioner for Refugees (UNHCR) is also involved in efforts to help ease Timanovskaya’s plight.

Timanovskaya’s case is the latest in Lukashenko’s repressive blows against anyone that criticises him or his government. In May the authorities forced a commercial Ryanair flight to land in Minsk and arrested top opposition blogger Roman Protasevich and his girlfriend, who were subsequently tortured, according to their supporters.

Timanovskaya was due to compete in the women's 200-metre sprint on August 2. Her problems started after she publically criticised the Belarusian team officials who had entered her for the women’s 4x400-metre relay event on July 29 at short notice after some team members were found to be ineligible to compete.

The Belarusian Olympic Committee said in a statement that Timanovskaya withdrew from the games on the advice of doctors concerned about her "emotional [and] psychological state,” a claim that Timanovskaya has denied.