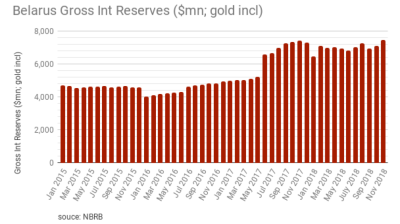 Belarus gross international reserves up in November 2019 to $7.4bn
By bne IntelliNews December 10, 2018

The foreign exchange reserves of Belarus increased by $3326mn, or 4.7% month-on-month, to $7.440bn in November following a 2.6% m/m increase in October, the National Bank of Belarus (NBB) said in a statement on December 7.

The result was mainly attributed to revenues from export duties on oil and oil products, sales of FX-denominated bonds on the domestic market, purchase of foreign exchange at the Belarusian Currency and Stock Exchange.

In November, the Belarusian government and the NBB also fulfilled external and internal foreign exchange obligations worth about $150mn.

According to the central bank's monetary policy guidelines for 2018, the volume of international reserve assets as of early 2019, taking into account the repayment of foreign exchange internal and external obligations by the government, should be at least $6bn.

Belarus is going to raise $2bn via Eurobond placements in 2019-2020, according to a special decree inked by the nation's President Alexander Lukashenko in November.

Belarus tapped the international debt market in February for the first time this year with a new $600mn issue of 12-year Eurobond with 6.2% coupon following January's drop in the nation's foreign exchange reserves by 11.5% month-on-month, to $6.477bn.

According to Minsk's officials, the country also expects to receive a $1bn loan from Russia as an inter-governmental loan soon.

In October, the Russia-led Eurasian Fund for Stabilisation and Development (EFSD) allocated a $200mn support tranche to Belarus from the lender's $2bn loan agreed with Minsk in 2016. The EFSD's move seems to be purely political, as Belarus has failed to meet benchmarks in five out of 25 indicators (including three control indicators) by the initial deadline of October 1, 2017.

On November 26, the nation's Finance Minister Maksim Yermolovich told journalists that Minsk should repay around $5.4bn of the state debt in 2019-2020. "Some of the $5.4bn will be refinanced. In the to-be-refinanced part $2bn will be raised as untied credit resources, which we are going to get abroad by floating the relevant bonds for a broad spectrum of investors," he said.

Russia Services PMI bounces back to 47.8 in June, up from 35.9 in May
20 hours ago
Croatia to be among countries worst hit by tourism collapse this year, says UNCTAD
1 day ago
Russians, Serbians, Turks the biggest property buyers in Montenegro
2 days ago
Polish PMI advances but remains below 50 points as restrictions lifted
2 days ago
Czech PMI slightly up in June but still under 50-point threshold
2 days ago