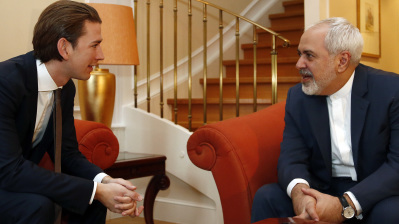 Austria’s Oesterreichische Kontrollbank (OeKB) is prepared to facilitate trade between Austrian companies and Iranian counterparts, the chairman of the Vienna Chamber of Economics has said according to a July 25 press release put out by the vice president of the Iranian Chamber of Commerce, Industries, Mines and Agriculture (ICCIMA).

The move would fly in the face of US sanctions due to take effect in August as part of the Trump administration’s plan to put Iran in an economic stranglehold to force concessions on its role in the Middle East. But as a relatively small market player that offers credit facilities to small and medium sized enterprises, OeKB may not be substantially exposed to the American financial system or market and thus might not suffer sanctions.

ICCIMA vice president Pedram Soltani is touring the European Union, following up on opportunities for Iran to escape the US economic assault that may have been partly opened up by the recent visits paid to Austria and Switzerland by Iranian President Hassan Rouhani and Iranian Foreign Minister Mohammad Javad Zarif. Rouhani and Zarif were given firm commitments by the EU that it would endeavour to find ways to help Iran’s economy survive the heavy sanctions. At the start of July, Austria assumed the revolving six-month presidency of the EU and the OeKB announcement might have been prepared as a first step forward by the bloc in creating feasible financing arrangements between Iran and Europe that are shielded from US punitive action.

Founded in 1946, OeKB acts as Austria’s export credit insurance agency. The funds for export financing are raised from its own bonds.

"The capacity for trade between Iran and Austria is very high, and so far we have probably only used 10 or 20% of it," Soltani said.

“We know that the current difficulties are short term and will be resolved within six months, one year, two years, or by the end of the [Rouhani presidency]. We need to develop strategies for realising trade talks between the two countries," he added.

Soltani said: "Some European banks, especially small banks that have less financial dealings with the United States, are waiting for the European Union's decision to resume the provision of services to Iranian banks, with the necessary support from the Union."

Chairman of the Vienna Chamber of Economics Walter Ruck was quoted in the press release as saying: "Following negotiations with the Austrian bank, they announced that they were willing to ensure the settlement of 80% of the volume of trade between Iran and Austria.”

He added that another 20% would be guaranteed through an Austrian finance company. “Austrian banks have already had doubts about their relationship with Iran because of the sanctions, but now they are willing to re-establish the connection," Ruck said.

Last week, the European Union agreed to add Iran to the list of countries that its lending arm, the Luxembourg-based European Investment Bank (EIB), is permitted to do business with—but the development bank’s president, Werner Hoyer, responded that its global operations would be put at risk if it were to invest in the Islamic Republic.

Hoyer was quite entitled to take that line—the EU executive has made it clear that the addition of Iran to the list, to take effect from August, in no way forces the EIB to begin lending—but it added to the scepticism in Iran as to whether the major European powers are going to deliver enough viable economic measures to maintain the multilateral nuclear accord as a pact worth staying in for Tehran, following the unilateral withdrawal from the agreement by the US in May.

After its introduction in January 2016, the nuclear deal saw the removal of crippling santions levied against Iran in return for Tehran abiding by measures designed to bar any path it might possibly take to the development of a nuclear bomb.