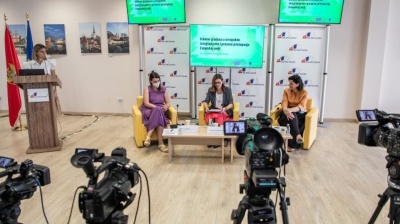 73.8% of Montenegrins want their country to become a member of the European Union, a survey carried out by the DeFacto agency and presented by the EU Info Centre on July 28 showed.

Montenegro hopes to become an EU member in 2025, and is currently the most advanced among the candidate countries from the Western Balkans.

The survey also showed that 71.9% of Montenegrins have a positive opinion about the EU.

“We have data on the citizens’ opinions regarding the EU and the membership since 2015 and we see a stable support, a bit lower compared to previous years whet it was record-high,” said Olivera Komar, consultant from De Facto agency.

She added that nearly half of Montenegrins have pointed out the better quality of life and better living standard as the main benefits from membership in the EU.

Better employment chances, free travel and guarantees for peace and security were also listed among the main advantages of membership.

42% of Montenegrins said that the EU is the biggest donor of funds for the country.

The majority of Montenegrins believe that the country is advancing towards EU membership as fast as possible, with 56.9% holding this opinion. 56.5% of people believe the country will join the bloc in 2025.

Russian banks extend profits in August, on track to earn a record RUB2.5 trillion this year

The sector's net profit in August amounted to RUB244bn ($3.3bn) with a return on capital of 26% in annual terms. The profits were 7% more than the July result of RUB229bn.

Russian banks extend profits in August, on track to earn a record RUB2.5 trillion this year
1 hour ago
Russia’s PPI inflation up 1.5% to 28.6% in August
16 hours ago
Montenegro’s economy posts strong 19% y/y growth in 2Q21, higher than EU average
2 days ago
Russia’s Duma elections statistics: the comet effect and the Moscow blob
3 days ago
Romania and Latvia's car ownership rates among lowest in Europe
3 days ago