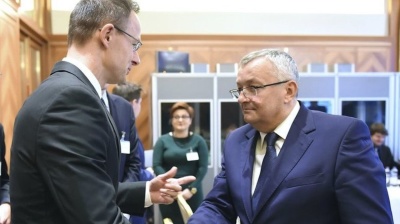 The Visegrad Group (V4) countries have decided to jointly build a high-speed railway connecting Budapest, Bratislava, Brno, and Warsaw, the Hungarian foreign minister said after talks with the transport ministers of the other three members in northern Slovakia on October 1.

The decision coincides with the political interests of all four members of the group comprising the Czech Republic, Hungary, Poland, and Slovakia, Peter Szijjarto told Hungarian public media.

Hungarian Prime Minister Viktor Orban, who has sought the political support of Poland, Slovakia, and the Czech Republic to reject the EU's migration policies, has also been an advocate for closer economic ties between the V4 countries. On numerous occasions, he spoke of the former Communist countries in the region as becoming the engine of EU growth.

The rate of growth of the V4 countries exceeds 4%, compared to the EU's 2.5%, a figure often cited by senior Hungarian government officials. Orban also stressed the need to conquer the competitive disadvantage the region faces in terms of its infrastructure network. Establishing a direct link between Warsaw and Budapest would be a flagship project, he said.

The public procurement tender for drawing up a feasibility study for the project will be called as early as this week. The next step will be to convene a V4 working group of officials representing the four countries in November.

Szijjarto said the public procurement process would last for half a year and the feasibility study would be completed in a year and a half or two years.

The new, two-track line would be suitable for trains up to a speed of 250 km/h. The trains will only stop in the three capital cities and Brno, he said. The minister said representatives from the European Investment Bank (EIB)were also present at Monday's meeting and expressed their interest in the project.

The EIB has so far financed scores of rail projects but only 14% of them were in Central Europe, Szijjarto said, adding that loan offers will also be invited from other financial institutions, too. "This will be a typical Visegrad project, with all the four countries involved in talks on funding," he said.

Slovak semiconductor company Tachyum, which has data centres in Bratislava and Santa Clara in the US, announced the launch of the first-ever universal processor FPGA prototype at the international ... more

Slovak Telekom and its mother company Deutsche Telekom lost their appeal against the judgments of the General Court relating to anticompetitive practices on the Slovak telecommunications market, ... more